The Russians are back buying luxury properties in central London and beyond. Favourable exchange rates and a rise in the price of oil mean that international buyers, particularly those from the Middle East and Russia, are spending millions on large homes in high-end neighbourhoods.

Why the Russians want Mayfair

Why the Russians want Mayfair
By Carol Lewis

The Russians are back buying luxury properties in central London and beyond. Favourable exchange rates and a rise in the price of oil mean that international buyers, particularly those from the Middle East and Russia, are spending millions on large homes in high-end neighbourhoods.

Camilla Dell, the managing partner at Black Brick Property Solutions, says her buying agency has had a 22 per cent increase in the number of Russians buying in central London this year compared with last. This includes a family who bought a large detached house in the heart of Kensington for £37 million and another who bought an apartment in a Mayfair development for £21 million. “The Russians have been our biggest spenders, paying an average of £18.5 million for their properties. They have been buying homes in prime central London, with a preference for Mayfair and Kensington. Their reasons for buying are relocating to London for family, better quality of life, safety and education. Brexit has not been a factor, although currency has,” Dell says.

The main nationalities buying in prime central London last year, according to the Mayfair-based agency, were British, Indian and Middle Eastern. This year the balance has shifted to Russian, French and Middle Eastern. Dell’s biggest sale this year was a £55 million house in Belgravia to a Saudi Arabian family. Savills also reports that super-prime sales, properties worth more than £10 million, are robust.

The agency also reports an increase in high-end sales in the home counties. There were four sales of more than £10 million in St George’s Hill in Surrey. High-spending buyers came from Europe, the Middle East, the Far East and Russia. 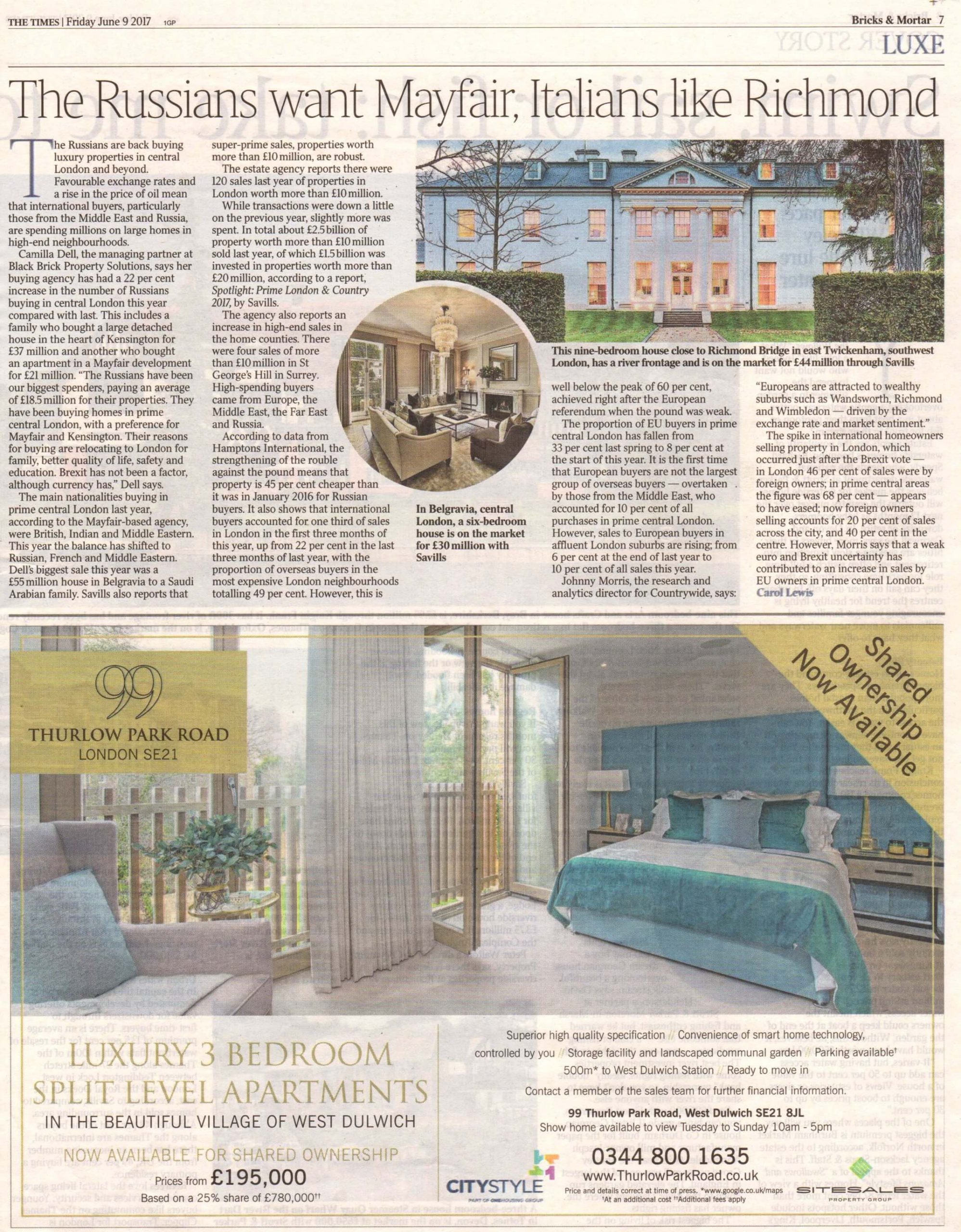 According to data from Hamptons International, the strengthening of the rouble against the pound means that property is 45 per cent cheaper than it was in January 2016 for Russian buyers. It also shows that international buyers accounted for one third of sales in London in the first three months of this year, up from 22 per cent in the last three months of last year, with the proportion of overseas buyers in the most expensive London neighbourhoods totalling 49 per cent. However, this is well below the peak of 60 per cent, achieved right after the European referendum when the pound was weak.

The proportion of EU buyers in prime central London has fallen from 33 per cent last spring to 8 per cent at the start of this year. It is the first time that European buyers are not the largest group of overseas buyers — overtaken by those from the Middle East, who accounted for 10 per cent of all purchases in prime central London. However, sales to European buyers in affluent London suburbs are rising; from 6 per cent at the end of last year to 10 per cent of all sales this year.

Johnny Morris, the research and analytics director for Countrywide, says: “Europeans are attracted to wealthy suburbs such as Wandsworth, Richmond and Wimbledon — driven by the exchange rate and market sentiment.”
The spike in international homeowners selling property in London, which occurred just after the Brexit vote — in London 46 per cent of sales were by foreign owners; in prime central areas the figure was 68 per cent — appears to have eased; now foreign owners selling accounts for 20 per cent of sales across the city, and 40 per cent in the centre. However, Morris says that a weak euro and Brexit uncertainty has contributed to an increase in sales by EU owners in prime central London.