Clapham is not a straightforward neighbourhood. Unlike Dalston, it isn’t synonymous with hipsters; it isn’t known for its international wealth like Knightsbridge; and it isn’t the naturalised home of the English gent like Hampstead. It’s best described as a south London suburb that has welcomed wave upon wave of migration from other boroughs.

Clapham is not a straightforward neighbourhood. Unlike Dalston, it isn’t synonymous with hipsters; it isn’t known for its international wealth like Knightsbridge; and it isn’t the naturalised home of the English gent like Hampstead. It’s best described as a south London suburb that has welcomed wave upon wave of migration from other boroughs.

The Georgian villas surrounding its famous Common welcome the overspill from Battersea and Chelsea, while its terraces are overflowing with young families and fresh-faced 20-somethings, often renting their home with many others.

“It is estimated that a quarter of Clapham’s buyers come from one of three boroughs: Kensington and Chelsea, Hammersmith and Fulham, and the City of Westminster,” says Lauren Atkins, MD of The Malins Group, which is currently selling 24 apartments it’s built in an old metalworks in the area, “and there is a growing trend, for people searching between Chelsea and Marylebone, to end up buying in Clapham Old Town.”

This slow down is being seen in areas considered part of Prime Central London in particular, and though Clapham has not traditionally been seen as a paid-up member of that exclusive club, the Old Town, Abbeville Village and the streets running off Northcote Road (known by some as Nappy Valley) are certainly resembling them more and more.
“Having operated in Clapham for the past 10 years, I’ve seen the area change from being a new Londoner’s temporary ‘stop point’ to an established neighbourhood in its own right,” says David Law, sales manager at Foxtons’ Battersea office.

“Ten years ago, Clapham’s demographic comprised mainly of first-jobbers in their early 20s, buying or renting their first property with the help of mum and dad, and happily frequenting the likes of the local O’Neill’s on Clapham High Street.” Now, O’Neill’s is a Byron, its neighbour is Trinity, a Michelin-starred restaurant, and it’s surrounded by gastropubs with leafy gardens like The Stonhouse, The Jam Tree and The Calf. 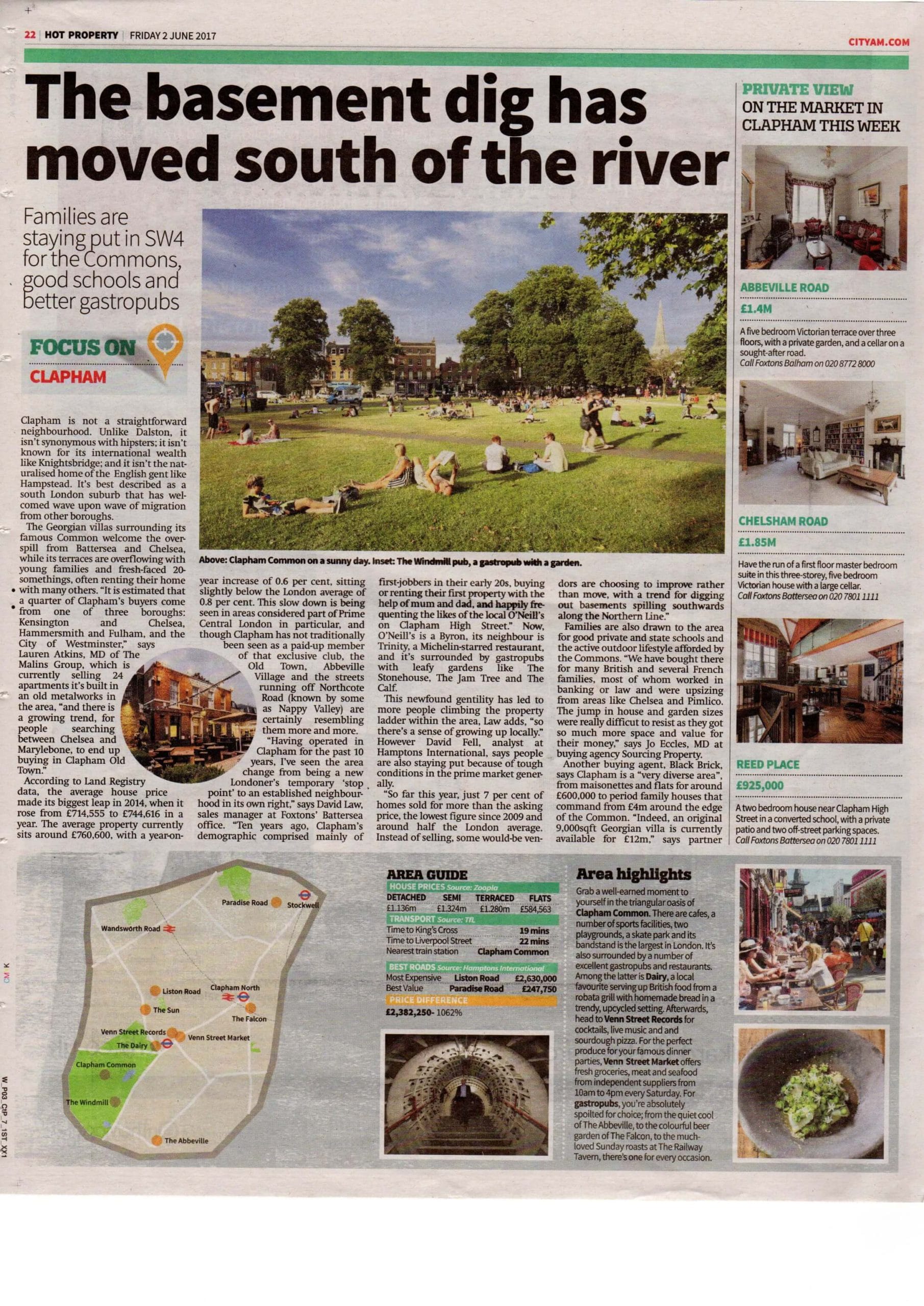 This newfound gentility has led to more people climbing the property ladder within the area, Law adds, “so there’s a sense of growing up locally.” However David Fell, analyst at Hamptons International, says people are also staying put because of tough conditions in the prime market generally.

Families are also drawn to the area for good private and state schools and the active outdoor lifestyle afforded by the Commons. “We have bought there for many British and several French families, most of whom worked in banking or law and were upsizing from areas like Chelsea and Pimlico. The jump in house and garden sizes were really difficult to resist as they got so much more space and value for their money,” says Jo Eccles, MD at buying agency Sourcing Property.

Another buying agent, Black Brick, says Clapham is a “very diverse area”, from maisonettes and flats for around £600,000 to period family houses that command from £4m around the edge of the Common. “Indeed, an original 9,000sqft Georgian villa is currently available for £12m,” says partner Caspar Harvard-Walls.

Area highlights
Grab a well-earned moment to yourself in the triangular oasis of Clapham Common. There are cafes, a number of sports facilities, two playgrounds, a skate park and its bandstand is the largest in London. It’s also surrounded by a number of excellent gastropubs and restaurants. Among the latter is Dairy, a local favourite serving up British food from a robata grill with homemade bread in a trendy, upcycled setting. Afterwards, head to Venn Street Records for cocktails, live music and and sourdough pizza. For the perfect produce for your famous dinner parties, Venn Street Market offers fresh groceries, meat and seafood from independent suppliers from 10am to 4pm every Saturday. For gastropubs, you’re absolutely spoiled for choice; from the quiet cool of The Abbeville, to the colourful beer garden of The Falcon, to the much-loved Sunday roasts at The Railway Tavern, there’s one for every occasion.
Area guide