Estate agencies are spending tens of thousands of pounds developing virtual-reality tours of high-end properties, so buyers can privately gaze at the interior of immaculate homes, including those yet to be built, in their own time.

Estate agents are investing in headsets, but not everyone is convinced.

Estate agencies are spending tens of thousands of pounds developing virtual-reality tours of high-end properties, so buyers can privately gaze at the interior of immaculate homes, including those yet to be built, in their own time. 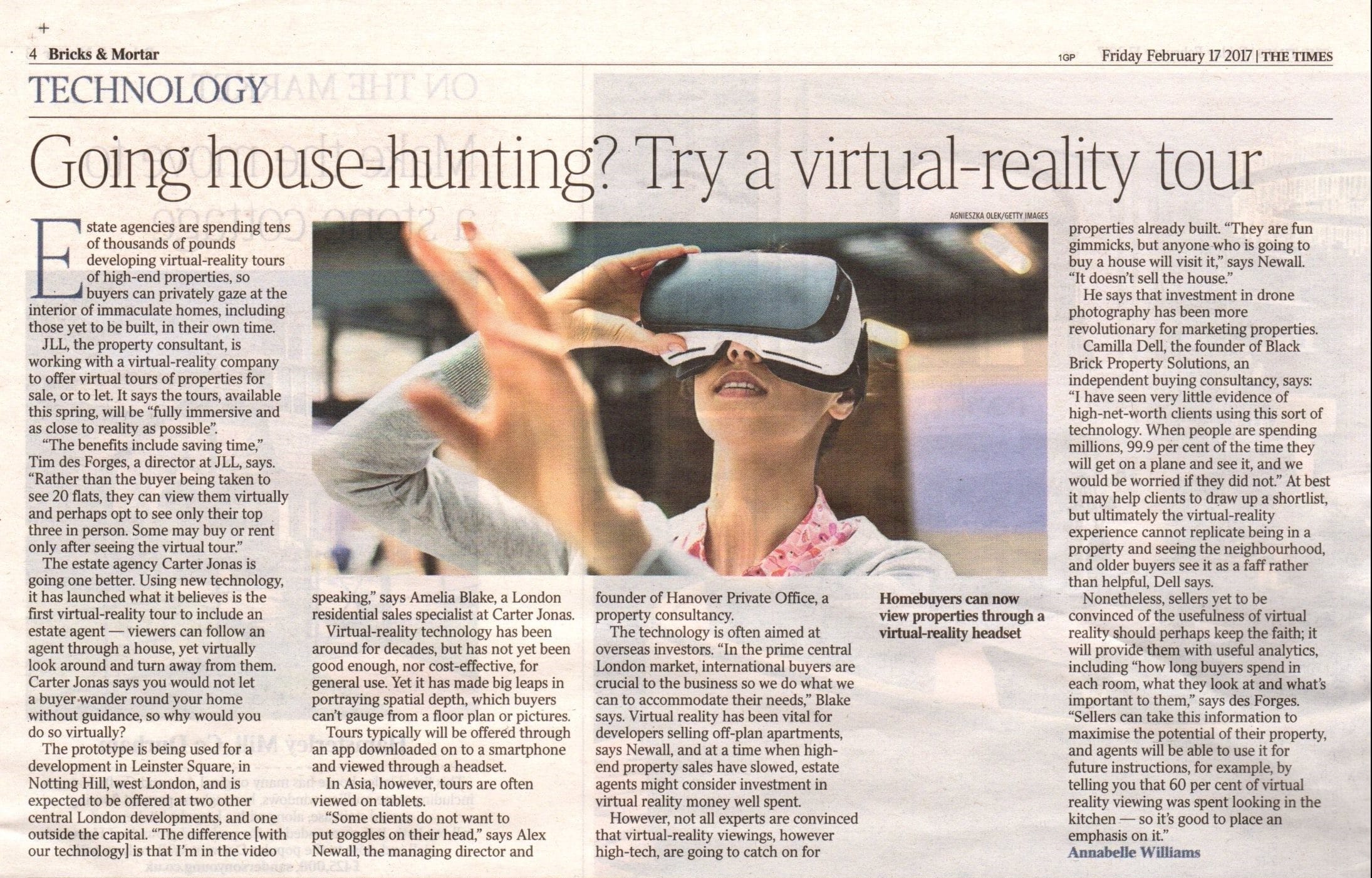 JLL, the property consultant, is working with a virtual-reality company to offer virtual tours of properties for sale, or to let. It says the tours, available this spring, will be “fully immersive and as close to reality as possible”.

“The benefits include saving time,” Tim des Forges, a director at JLL, says. “Rather than the buyer being taken to see 20 flats, they can view them virtually and perhaps opt to see only their top three in person. Some may buy or rent only after seeing the virtual tour.”

The estate agency Carter Jonas is going one better. Using new technology, it has launched what it believes is the first virtual-reality tour to include an estate agent — viewers can follow an agent through a house, yet virtually look around and turn away from them. Carter Jonas says you would not let a buyer wander round your home without guidance, so why would you do so virtually?

The prototype is being used for a development in Leinster Square, in Notting Hill, west London, and is expected to be offered at two other central London developments, and one outside the capital. “The difference [with our technology] is that I’m in the video speaking,” says Amelia Blake, a London residential sales specialist at Carter Jonas.

Virtual-reality technology has been around for decades, but has not yet been good enough, nor cost-effective, for general use. Yet it has made big leaps in portraying spatial depth, which buyers can’t gauge from a floor plan or pictures.

Tours typically will be offered through an app downloaded on to a smartphone and viewed through a headset.

In Asia, however, tours are often viewed on tablets.

“Some clients do not want to put goggles on their head,” says Alex Newall, the managing director and founder of Hanover Private Office, a property consultancy.

The technology is often aimed at overseas investors. “In the prime central London market, international buyers are crucial to the business so we do what we can to accommodate their needs,” Blake says. Virtual reality has been vital for developers selling off-plan apartments, says Newall, and at a time when high-end property sales have slowed, estate agents might consider investment in virtual reality money well spent.

However, not all experts are convinced that virtual-reality viewings, however high-tech, are going to catch on for properties already built. “They are fun gimmicks, but anyone who is going to buy a house will visit it,” says Newall. “It doesn’t sell the house.”

He says that investment in drone photography has been more revolutionary for marketing properties.

Camilla Dell, the founder of Black Brick Property Solutions, an independent buying consultancy, says: “I have seen very little evidence of high-net-worth clients using this sort of technology. When people are spending millions, 99.9 per cent of the time they will get on a plane and see it, and we would be worried if they did not.” At best it may help clients to draw up a shortlist, but ultimately the virtual-reality experience cannot replicate being in a property and seeing the neighbourhood, and older buyers see it as a faff rather than helpful, Dell says.

Nonetheless, sellers yet to be convinced of the usefulness of virtual reality should perhaps keep the faith; it will provide them with useful analytics, including “how long buyers spend in each room, what they look at and what’s important to them,” says des Forges. “Sellers can take this information to maximise the potential of their property, and agents will be able to use it for future instructions, for example, by telling you that 60 per cent of virtual reality viewing was spent looking in the kitchen — so it’s good to place an emphasis on it.”