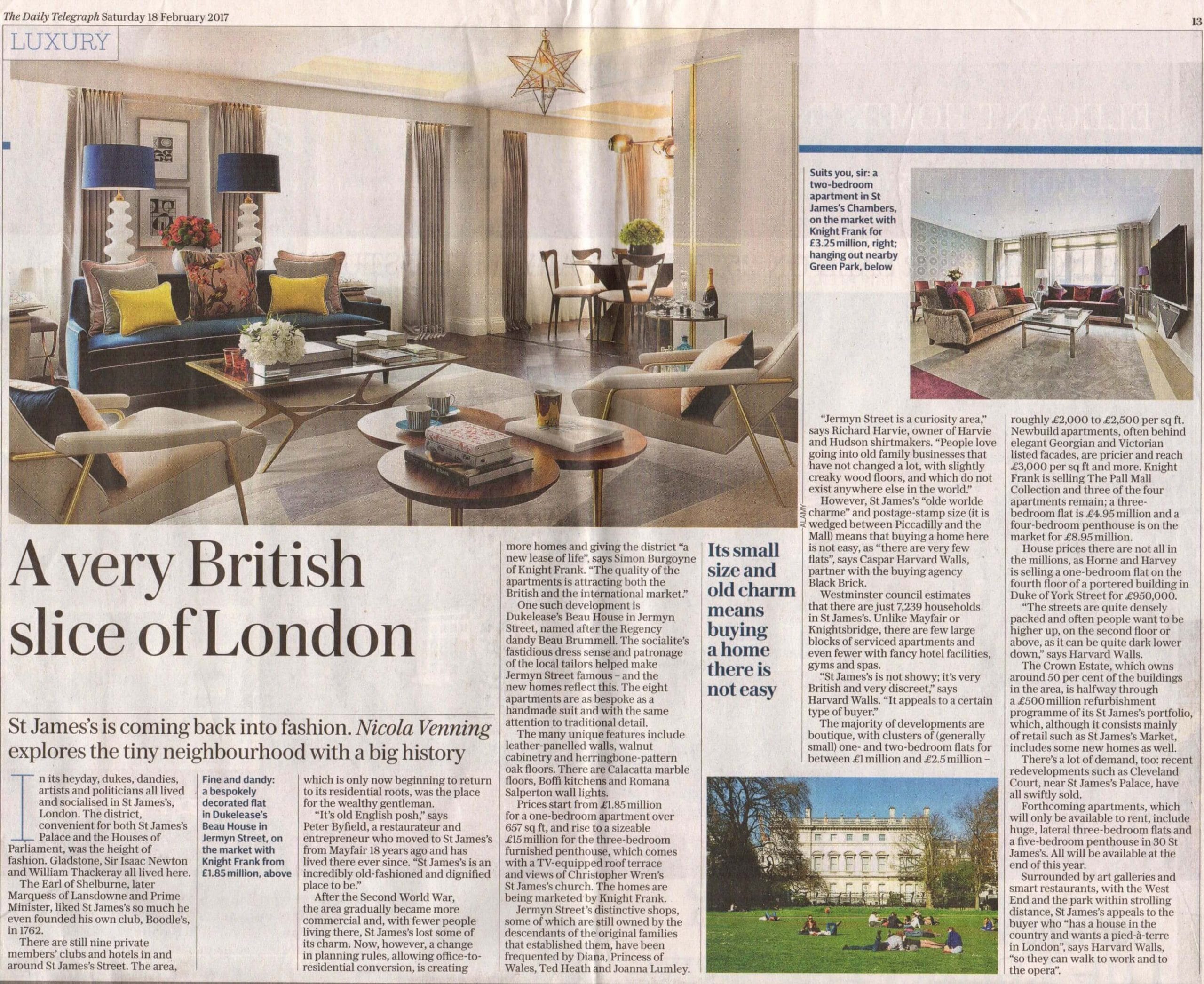 The Earl of Shelburne, later Marquess of Lansdowne and Prime Minister, liked St James’s so much he even founded his own club, Boodle’s, in 1762.

There are still nine private members’ clubs and hotels in and around St James’s Street. The area, which is only now beginning to return to its residential roots, was the place for the wealthy gentleman.

“It’s old English posh,” says Peter Byfield, a restaurateur and entrepreneur who moved to St James’s from Mayfair 18 years ago and has lived there ever since. “St James’s is an incredibly old-fashioned and dignified place to be.”

After the Second World War, the area gradually became more commercial and, with fewer people living there, St James’s lost some of its charm. Now, however, a change in planning rules, allowing office-to-residential conversion, is creating more homes and giving the district “a new lease of life”, says Simon Burgoyne of Knight Frank. “The quality of the apartments is attracting both the British and the international market.”

One such development is Dukelease’s Beau House in Jermyn Street, named after the Regency dandy Beau Brummell. The socialite’s fastidious dress sense and patronage of the local tailors helped make Jermyn Street famous – and the new homes reflect this. The eight apartments are as bespoke as a handmade suit and with the same attention to traditional detail.

A two-bedroom apartment in St James’s Chambers is on the market with Knight Frank for £3.25 million

Prices start from £1.85 million for a one-bedroom apartment over 657 sq ft, and rise to a sizeable £15 million for the three-bedroom furnished penthouse, which comes with a TV-equipped roof terrace and views of Christopher Wren’s St James’s church. The homes are being marketed by Knight Frank.

Jermyn Street’s distinctive shops, some of which are still owned by the descendants of the original families that established them, have been frequented by Diana, Princess of Wales, Ted Heath and Joanna Lumley.

“Jermyn Street is a curiosity area,” says Richard Harvie, owner of Harvie and Hudson shirtmakers. “People love going into old family businesses that have not changed a lot, with slightly creaky wood floors, and which do not exist anywhere else in the world.”

However, St James’s “olde worlde charme” and postage-stamp size (it is wedged between Piccadilly and the Mall) means that buying a home here is not easy, as “there are very few flats”, says Caspar Harvard Walls, partner with the buying agency Black Brick.

Westminster council estimates that there are just 7,239 households in St James’s. Unlike Mayfair or Knightsbridge, there are few large blocks of serviced apartments and even fewer with fancy hotel facilities, gyms and spas.

“St James’s is not showy; it’s very British and very discreet,” says Harvard Walls. “It appeals to a certain type of buyer.”

A bespoke decorated flat in Dukelease’s Beau House in Jermyn Street, on the market with Knight Frank from £1.85 million

The majority of developments are boutique, with clusters of (generally small) one- and two-bedroom flats for between £1 million and £2.5 million – roughly £2,000 to £2,500 per sq ft. Newbuild apartments, often behind elegant Georgian and Victorian listed facades, are pricier and reach £3,000 per sq ft and more. Knight Frank is selling The Pall Mall Collection and three of the four apartments remain; a three-bedroom flat is £4.95 million and a four-bedroom penthouse is on the market for £8.95 million.

House prices there are not all in the millions, as Horne and Harvey is selling a one-bedroom flat on the fourth floor of a portered building in Duke of York Street for £950,000.

“The streets are quite densely packed and often people want to be higher up, on the second floor or above, as it can be quite dark lower down,” says Harvard Walls.

The Crown Estate, which owns around 50 per cent of the buildings in the area, is halfway through a £500 million refurbishment programme of its St James’s portfolio, which, although it consists mainly of retail such as St James’s Market, includes some new homes as well.

There’s a lot of demand, too: recent redevelopments such as Cleveland Court, near St James’s Palace, have all swiftly sold.

Forthcoming apartments, which will only be available to rent, include huge, lateral three-bedroom flats and a five-bedroom penthouse in 30 St James’s. All will be available at the end of this year.

Surrounded by art galleries and smart restaurants, with the West End and the park within strolling distance, St James’s appeals to the buyer who “has a house in the country and wants a pied-à-terre in London”, says Harvard Walls, “so they can walk to work and to the opera”.