As property advisors, we are often asked what is the best kind of investment in London - a new build property or an older style or period property?

As property advisers, we are often asked what is the best kind of investment in London – a new build property or an older style or period property? 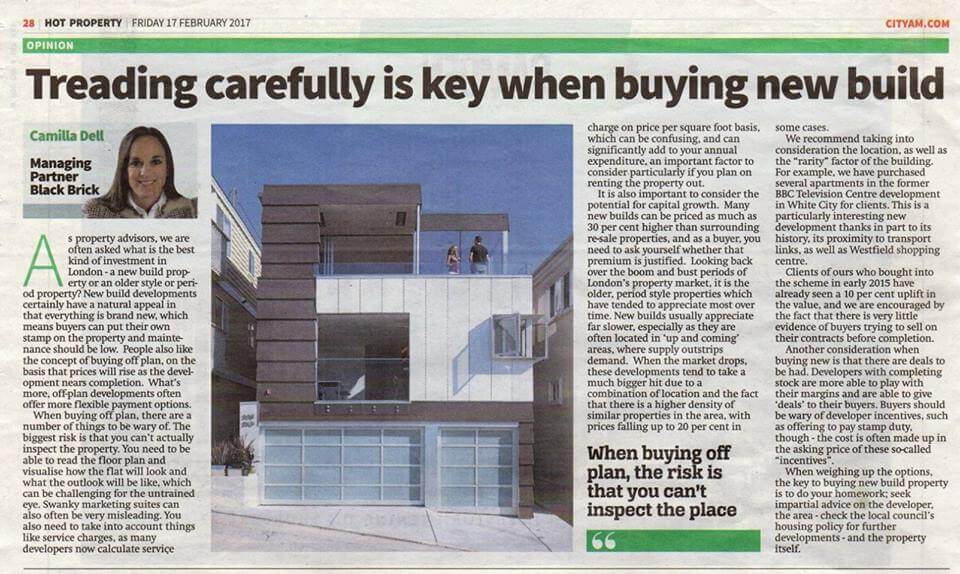 New build developments certainly have a natural appeal in that everything is brand new, which means buyers can put their own stamp on the property and maintenance should be low. People also like the concept of buying off plan, on the basis that prices will rise as the development nears completion. What’s more, off-plan developments often offer more flexible payment options.

When buying off plan, there are a number of things to be wary of. The biggest risk is that you can’t actually inspect the property. You need to be able to read the floor plan and visualise how the flat will look and what the outlook will be like, which can be challenging for the untrained eye. Swanky marketing suites can also often be very misleading.

You also need to take into account things like service charges, as many developers now calculate service charge on price per square foot basis, which can be confusing, and can significantly add to your annual expenditure, an important factor to consider particularly if you plan on renting the property out.

It is also important to consider the potential for capital growth. Many new builds can be priced as much as 30 per cent higher than surrounding re-sale properties, and as a buyer, you need to ask yourself whether that premium is justified. Looking back over the boom and bust periods of London’s property market, it is the older, period style properties which have tended to appreciate most over time.

New builds usually appreciate far slower, especially as they are often located in ‘up and coming’ areas, where supply outstrips demand. When the market drops, these developments tend to take a much bigger hit due to a combination of location and the fact that there is a higher density of similar properties in the area, with prices falling up to 20 per cent in some cases.

We recommend taking into consideration the location, as well as the “rarity” factor of the building. For example, we have purchased several apartments in the former BBC Television Centre development in White City for clients. This is a particularly interesting new development thanks in part to its history, its proximity to transport links, as well as Westfield shopping centre.

Clients of ours who bought into the scheme in early 2015 have already seen a 10 per cent uplift in the value, and we are encouraged by the fact that there is very little evidence of buyers trying to sell on their contracts before completion.

Another consideration when buying new is that there are deals to be had. Developers with completing stock are more able to play with their margins and are able to give ‘deals’ to their buyers. Buyers should be wary of developer incentives, such as offering to pay stamp duty, though – the cost is often made up in the asking price of these so-called “incentives”.

When weighing up the options, the key to buying new build property is to do your homework; seek impartial advice on the developer, the area – check the local council’s housing policy for further developments – and the property itself.