Sealed bids and gazumping have returned to central London in a remarkable spring revival of a market in “deep freeze” for two years.

Buying agents said the number of clients looking for “Brexit bargains” in areas such as Knightsbridge and Canary Wharf had soared by as much as a third in recent weeks. 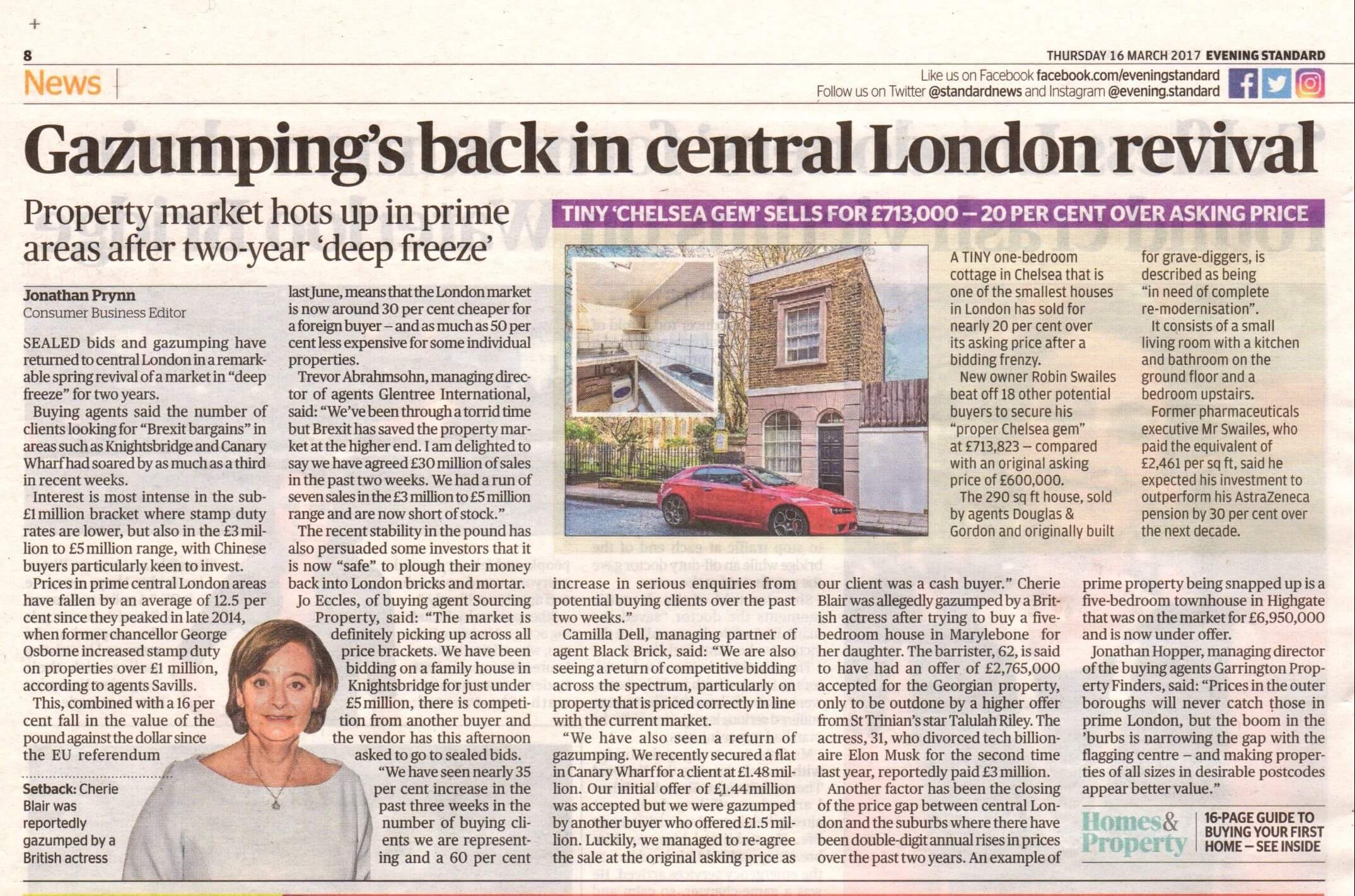 Interest is most intense in the sub-£1 million bracket where stamp duty rates are lower, but also in the £3 million to £5 million range, with Chinese buyers particularly keen to invest.

Prices in prime central London areas have fallen by an average of 12.5 per cent since they peaked in late 2014, when former chancellor George Osborne increased stamp duty on properties over £1 million, according to agents Savills.

This, combined with a 16 per cent fall in the value of the pound against the dollar since the EU referendum last June, means that the London market is now around 30 per cent cheaper for a foreign buyer — and as much as 50 per cent less expensive for some individual properties.

Trevor Abrahmsohn, managing director of agents Glentree International, said: “We’ve been through a torrid time but Brexit has saved the property market at the higher end. I am delighted to say we have agreed £30 million of sales in the past two weeks. We had a run of seven sales in the £3 million to £5 million range and are now short of stock.”

The recent stability in the pound has also persuaded some investors that it is now “safe” to plough their money back into London bricks and mortar.

Jo Eccles, of buying agent Sourcing Property, said: “The market is definitely picking up across all price brackets. We have been bidding on a family house in Knightsbridge for just under £5 million, there is competition from another buyer and the vendor has this afternoon asked to go to sealed bids.

Camilla Dell, managing partner of agent Black Brick, said: “We are also seeing a return of competitive bidding across the spectrum, particularly on property that is priced correctly in line with the current market.

“We have also seen a return of gazumping. We recently secured a flat in Canary Wharf for a client at £1.48 million. Our initial offer of £1.44 million was accepted but we were gazumped by another buyer who offered £1.5 million. Luckily, we managed to re-agree the sale at the original asking price as our client was a cash buyer.”

Cherie Blair was allegedly gazumped by a British actress after trying to buy a five-bedroom house in Marylebone  for  her daughter. The barrister, 62, is said to have had an offer of £2,765,000 accepted for the Georgian property, only to be outdone by a higher offer from St Trinian’s star Talulah Riley. The actress, 31, who divorced tech billionaire Elon Musk for the second time  last year, reportedly paid £3 million.

Another factor has been the closing of the price gap between central London and the suburbs where there have been double-digit annual rises in prices over the past two years. An example of prime property being snapped up is a five-bedroom townhouse in Highgate that was on the market for £6,950,000 and is now under offer.

Jonathan Hopper, managing director of the buying agents Garrington Property Finders, said: “Prices in the outer boroughs will never catch those in prime London, but the boom in the ’burbs is narrowing the gap with the flagging centre — and making properties of all sizes in desirable postcodes appear better value.”