Don’t have enough space at home? Buy the house next door (you might even save on stamp duty) 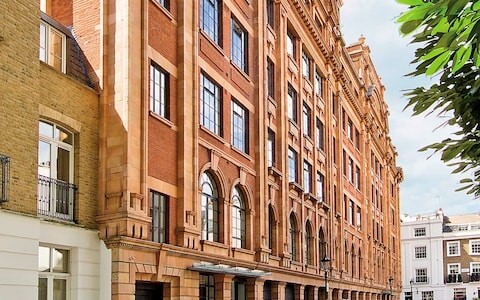 With the “improve, don’t move” mantra ringing in their ears – sometimes fuelled by a reluctance to pay the huge stamp duty bill involved in upsizing to a bigger house – many homeowners are finding a new way to extend. They’re buying next door.

In certain situations, it can make perfect sense. You love your house and the location, but you need more space, perhaps because of boomerang children or grandparents moving in, or some other millennial or multi-generational arrangement. You’ve probably already extended into the loft, out the back and maybe even underground. So should the chance arise to extend into next door too, why wouldn’t you do it?

There’s still stamp duty to pay, of course, but it will most likely be a lesser sum to buy a neighbouring property of similar size to your own than it would to upgrade to a far bigger house (even taking the three per cent surcharge for second homes into ­account). “There will be the costs of ­architects, builders and solicitors too, but it will still represent a considerable saving on the usual costs of selling a home and buying a bigger one,” says Sara Ransom of buying agent Stacks Property Search.

There may even be some financial gain in buying next door. “I encourage my clients to do so at every opportunity, where their financial position allows,” says Marc Schneiderman, of estate agency Arlington Residential. Even when the space isn’t needed immediately, he is looking long term at the investment value of having a handily located spare property to rent out, to eventually sell as a project for someone else to convert, or use some of next door’s garden to add to your own. “You may only get the opportunity once to buy next door, so when it does become available, consider it very closely,” he says.

Making a huge profit is rarely the motivating factor behind such projects, as the whole may not be worth more than the sum of its parts. Two adjoining cottages were recently available in Devon’s Culm Valley for a joint price of £695,000 through Greenslade Taylor Hunt. “If they were sold separately, would they be worth more than £350,000 each? Probably,” says Gideon Sumption of Stacks. “It rarely makes financial sense to join two properties, unless there is some marriage value to be released, such as restoring a shared drive to single ownership, or even getting rid of an unpleasant neighbour.” 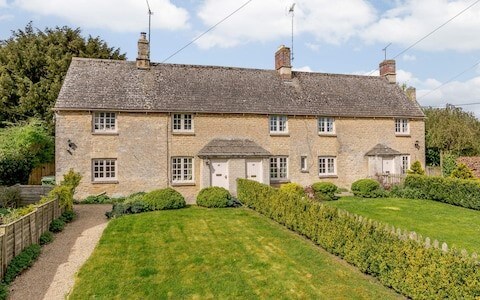 Three Cotswold cottages which can be knocked together, on the market through Strutt & Parker.

For most people who carry out this kind of conversion, it’s all about the lifestyle or emotional benefits. It attracts buyers across the entire property spectrum, from small country cottages to huge central London apartments. “If it enhances your quality of life, forget about the end value and go for it, and you may well make an unintentional stamp duty saving,” says Sumption.

At the priciest end of the knock-through spectrum, there’s Trevor Square in Kensington, Harrods’ former Grade I listed depository. Nick and Christian Candy, the developers, briefly lived in the building and in 2006 turned four of the apartments into one vast, six-bedroom duplex that spans 6,400 sq ft and is now on sale for £30 million through Harrods Estates. “Buyers in this market want purpose-built lateral living with a 24/7 concierge and parking, and this ginormous property comes with four large, secure parking spaces,” says Shaun Drummond, sales director of Harrods Estates. 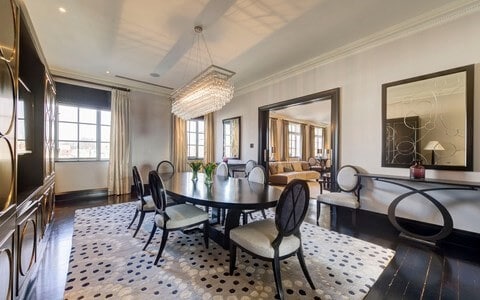 The huge duplex made from four apartments on Trevor Square, £30 million through Harrods Estates

In some London boroughs – Kensington and Chelsea, and Westminster are the notable ones – reducing the housing stock by knocking two into one goes against their targets to increase supply of new homes, so owners are now unlikely to be granted permission. “Even where a house has a mews behind, if it has been two separate households paying two lots of council tax, it will be a challenge to secure planning,” says Brendan Roberts, director at Aylesford International.

Apartments can lend themselves more readily to this kind of redevelopment, either by creating a duplex by knocking into the flat above or below, or by knocking into the flat next door, in a mansion block for example – provided you have the consent of the freeholder/landlord and the local council. “You would also need to amalgamate the leases, which is potentially complicated,” says Simon Tollit, co-founder and director of Tedworth Property.

In some London boroughs, reducing the housing stock by knocking two into one goes against their targets to increase supply of new homes, so owners are now unlikely to be granted permission

“Some excellent examples can be found in South Kensington, where a number of stucco-fronted period buildings have been brought together to form exceptionally wide residences, particularly those located on first floors, which tend to have the highest ceilings and grandest proportions,” adds Lee.

At the opposite end of the spectrum, there are rural opportunities crying out to be restored into one. Occasionally, you will find an entire row of two-up, two-down farmworkers’ cottages up for sale, says Bruce King, director at Cheffins estate agency in Cambridge. “The properties that work best in this situation are not high value so even when you factor in the buying and conversion costs, it can be cheaper than buying one property,” he says. “They don’t come up very often, so keep an eye on property auctions and private treaty sales, or ask local farmers and landowners.” Nicholas and Jill Leader’s house in Canterbury, £599,950 with Strutt & Parker

Martin Walshe, of Cheffins, expects demand for knock-throughs to rise in central Cambridge, too, where city centre stock is an issue. He mentions a current example on the market: two neighbouring Victorian terraced houses in Romsey Town, priced at £550,000 for the three-bedroom, and £400,000 for the two-bedroom. Both are owned by the same couple, who live in one and rent out the other.

Walshe suggests knocking through the two would cost £100,000, including enclosing the driveway that links them with a modern, glass walkway. “It works best in city centre homes when the houses need complete modernisation and can be picked up at lower prices, reconfigured and then sold at a premium,” he adds. 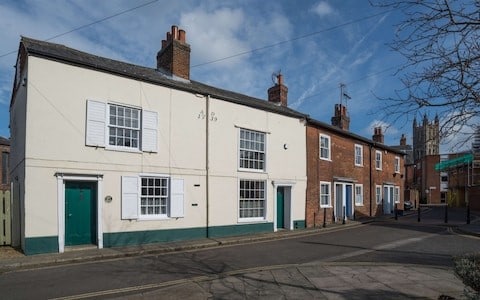 Nicholas and Jill Leader’s house in Canterbury, £599,950 with Strutt & Parker.

One issue to avoid is creating a super-sized house whose value is out of proportion with what’s around it – as Jamie Oliver discovered. He spent millions conjoining two Primrose Hill properties into one, which failed to sell a few years ago. He then had to reinstate it as two separate houses.

It’s the “best house in the street” syndrome that no one really wants, says Camilla Dell, managing partner at Black Brick buying agency, which sources prime London property. “If you knock two houses together on a street where the average house price is £3 million, it’s unlikely a buyer with £6 million will want to buy there. They will choose a better street. The key is to consider the surrounding area and work within the confines of the market,” she says.

It can be a lot of hassle reconfiguring two properties from scratch, including getting rid of surplus staircases and kitchens

It’s also a lot of hassle reconfiguring two properties from scratch, including getting rid of surplus staircases and kitchens. But without re-designing the newly combined property, you may end up with odd and compromised space. “In London, especially, integrating two houses is usually reserved for those with deep pockets and plenty of time,” says Tollit.

Sometimes, however, knocking through is really quite simple. In ­Canterbury, Kent, within close range of the famous cathedral’s spires, retired teachers Nicholas and Jill Leader seized the opportunity to knock through and create their dream home when their neighbours announced they were ­selling up.

“We were looking for a four-bedroom house within the city walls and couldn’t find anything. We had often been to our neighbour’s house for drinks and thought about how great it would be to knock these two mirror image properties into one,” says ­Nicholas, 80. Two houses in Cambridge, which can be knocked together, on the market with Cheffins.

Built in 1739, their original house had just a downstairs living room and small scullery, with a spiral staircase leading to one bedroom and a reduced-height attic. Their current two-in-one home – which is now on the market for £599,500 through Strutt & Parker – provides the four bedrooms they were looking for, and a large kitchen extension at the back, in place of the previous two small kitchens.

They spent about £60,000 on the conversion, filled 16 skips with rubbish, had to rewire the house completely and replumb, with the added complication of the property being in a conservation area. “The archaeological society was keen to jump down any hole we created,” adds Nicholas.

One pleasant surprise awaited them, however, when they knocked through; they found an 18th-century time capsule buried in a wall, containing a ha’penny and some toys, including a leather ball and hoop. “We replaced the capsule with some items including a letter saying we hoped whoever found it was as happy in the house as we have been,” says Nicholas.

“I still feel the sense of the two old houses. I climb the spiral staircase in No. 13 and walk along the corridor in No. 14. But it just feels like one adorable house now.”