A dedicated space for doing hair, nails and make-up is becoming a must-have in high-end homes Donald and Melania Trump have been handed the keys to the White House. This means that, in keeping with tradition, the Trumps are allowed to make changes to the property to meet their family’s needs.

Yes, you can have a ‘glam room’ like Melania 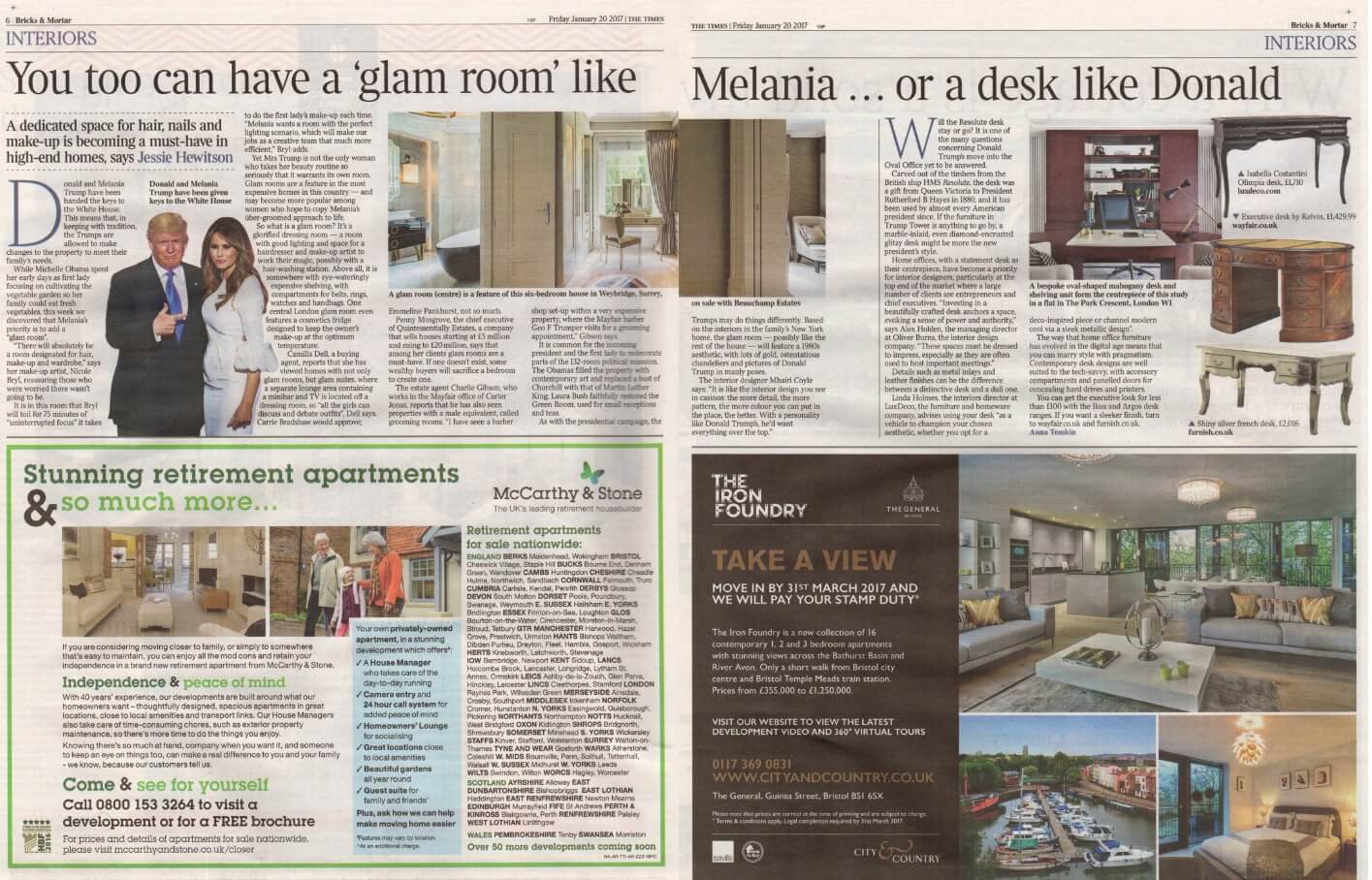 A dedicated space for doing hair, nails and make-up is becoming a must-have in high-end homes

Donald and Melania Trump have been handed the keys to the White House. This means that, in keeping with tradition, the Trumps are allowed to make changes to the property to meet their family’s needs.

While Michelle Obama spent her early days as first lady focusing on cultivating the vegetable garden so her family could eat fresh vegetables, this week we discovered that Melania’s priority is to add a “glam room”.

“There will absolutely be a room designated for hair, make-up and wardrobe,” says her make-up artist, Nicole Bryl, reassuring those who were worried there wasn’t going to be.

It is in this room that Bryl will toil for the 75 minutes of “uninterrupted focus” it takes to do the first lady’s make-up each time. “Melania wants a room with the perfect lighting scenario, which will make our jobs as a creative team that much more efficient,” Bryl adds.

Yet Mrs Trump is not the only woman who takes her beauty routine so seriously that it warrants its own room. Glam rooms are a feature in the most expensive homes in this country — and may become more popular among women who hope to copy Melania’s über-groomed approach to life.

So what is a glam room? It’s a glorified dressing room — a room with good lighting and space for a hairdresser and make-up artist to work their magic, possibly with a hair-washing station. Above all, it is somewhere with eye-wateringly expensive shelving, with compartments for belts, rings, watches and handbags. One central London glam room even features a cosmetics fridge designed to keep the owner’s make-up at the optimum temperature.

Camilla Dell, a buying agent, reports that she has viewed homes with not only glam rooms, but glam suites, where a separate lounge area containing a minibar and TV is located off a dressing room, so “all the girls can discuss and debate outfits”, Dell says.

Carrie Bradshaw would approve; Emmeline Pankhurst, not so much. Penny Mosgrove, the chief executive of Quintessentially Estates, a company that sells houses starting at £3 million and rising to £20 million, says that among her clients glam rooms are a must-have. If one doesn’t exist, some wealthy buyers will sacrifice a bedroom to create one.

The estate agent Charlie Gibson, who works in the Mayfair office of Carter Jonas, reports that he has also seen properties with a male equivalent, called grooming rooms. “I have seen a barber shop set-up within a very expensive property, where the Mayfair barber Geo F Trumper visits for a grooming appointment,” Gibson says.

It is common for the incoming president and the first lady to redecorate parts of the 132-room political mansion. The Obamas filled the property with contemporary art and replaced a bust of Churchill with that of Martin Luther King; Laura Bush faithfully restored the Green Room, used for small receptions and teas.

As with the presidential campaign, the Trumps may do things differently. Based on the interiors in the family’s New York home, the glam room — possibly like the rest of the house — will feature a 1980s aesthetic, with lots of gold, ostentatious chandeliers and pictures of Donald Trump in manly poses.

The interior designer Mhairi Coyle says: “It is like the interior design you see in casinos: the more detail, the more pattern, the more colour you can put in the place, the better. With a personality like Donald Trump’s, he’d want everything over the top.