Some locations are defying a downbeat Brexit market — with revived urban areas leading the way even at the best of times there are no sure things in property — and with political and economic uncertainty as a backdrop, coupled with tax changes that have hit many buyers hard, this is far from the best of times. Nonetheless, there are silver linings amid the dark pall that has hung over the market since last spring.

Ten places where house prices are set to rise 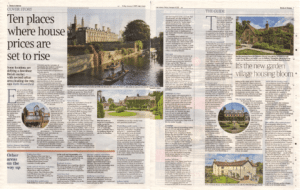 Some locations are defying a downbeat Brexit market — with revived urban areas leading the way even at the best of times there are no sure things in property — and with political and economic uncertainty as a backdrop, coupled with tax changes that have hit many buyers hard, this is far from the best of times. Nonetheless, there are silver linings amid the dark pall that has hung over the market since last spring.

Some areas set to benefit from transport improvements, some are the focus of multimillion-pound regeneration projects, while others are simply benefiting from a strong ripple of buyers moving from more expensive areas, pushing up prices.

You may not have heard of them all — yet — but if the experts are to be believed, these are the locations that will lead the market in 2017 and beyond.

Close to Manchester Metropolitan University and the University of Manchester, the Southern Gateway is set to follow the city’s Northern Quarter success story of regeneration and price growth.

The Gateway, to the south of the city centre, has an impressive development pipeline of 7,500 homes to be built in the next few years. Nick Whitten, an associate director in JLL’s residential research department, says that this emerging neighbourhood is not going to be a sea of flats; it already includes the £25 million HOME arts complex, and there are plans for enough shops and restaurants to turn it into a “destination”. With tram and rail links already in place, the Southern Gateway has great connectivity, and Whitten forecasts that prices will grow 7 per cent in 2017 and 28 per cent by 2021. Today you can pick up a one-bedroom flat for £145,000.

The redevelopment of the old Terry’s chocolate factory close to York Racecourse into luxury flats, and a smart restaurant and shop, is focusing buyer interest along Bishopthorpe Road.

Ed Stoyle, a partner at Carter Jonas, believes that the development — The Residence — will help to push local prices up 5 per cent this year.

“We’re advising buyers, from first-timers to investors, to act because, once the amenities are in place towards the end of 2017, a premium will be added to asking prices in the area,” he says.

Michael Redmond, the managing director of Redmove estate agency, says that York is set to benefit from the HS2 rail link and agrees that “Bishy Road” will be the focus of growth next year. A two-bedroom terraced house costs about £300,000.

Historically overlooked in favour of neighbouring Pembrokeshire, Carmarthenshire has appealingly low prices. In Carmarthen town, things have been looking up since the £74 million St Catherine’s Walk shopping centre opened in 2010, and in 2018 electrification of the Great Western Main Line will cut journey times to London Paddington by half an hour.

“It is also within a few minutes’ drive of the glorious coastline, beaches and rolling open countryside,” says Carol Peett, the managing director of West Wales Property Finders. “With excellent schools, a hospital and the University of Wales Trinity St David, S4C television studios, as well as theatres, restaurants, cinemas and shops, Carmarthen town is a vibrant place to live.”

For those looking for a quieter life, Carmarthen has tranquil outlying villages such as Laugharne and Llansteffan. A modest three-bedroom house in Carmarthen or a nearby village costs between £110,000 and £115,000. For £500,000 you can buy a family house with generous outside space.

Look beyond the resolutely tatty Kilburn High Road, and Kilburn has plenty going for it — period houses, leafy streets and posher areas all around.

Jo Eccles, a buying agent and managing director of Sourcing Property, believes that homes in West Kilburn are particularly good value, at about 20 per cent below those in neighbouring Queen’s Park and Maida Vale. “Four years ago, when we started buying there for clients, that price gap was closer to 40,” she says. “We expect the price gap to completely close over the next three to five years.” Today a two-bedroom flat costs about £550,000.

It’s far from the most posh of commuter towns in Surrey, but the £550 million being thrown at Woking in the form of new homes, town centre upgrades and road improvements will boost its profile. Commuters can be at London Waterloo in less than half an hour. Woking’s average prices — about £375,000 for a two-bedroom flat and £475,000 for a three-bedroom house — are fantastic value compared with the capital.

The impact that buyers leaving London can have on prices in the commuter belt is well known, but Alan Williams, the managing partner of Fenn Wright, is putting his faith in the “double ripple” — buyers moving on from well-known commuter towns, farther out into the sticks. “These movers will compromise on travel if that means they can reside in a town that retains its traditional feel and charm amid beautiful surroundings,” says Williams.

Commuting from Sudbury isn’t horrendous; trains to Liverpool Street take 71 minutes. “Buyers get more house for their money and a lifestyle that many wouldn’t exchange for one of the busy commuter towns,” says Williams. It won’t only be London workers eyeing Sudbury; Bury St Edmunds and Cambridge are within commuting distance.

Rather like east London, the suburbs of east Leeds are finally blossoming, with areas such as Cross Gates, Colton and Rothwell experiencing price growth of 4.2 per cent in 2016. “They are traditionally affordable locations, yet all have good retail offerings within their centres,” says Andrew Hunt, a partner at the Allsop estate agency. He believes that price growth will continue in 2017, thanks to good city centre transport links and development of the nearby Thorpe Park business centre, with its offices, shops and homes. “We would expect in the next year house prices to rise in each of these suburbs by a further 4 to 5 per cent,” says Hunt. The average house price is £182,000 in Rothwell, £186,000 in Cross Gates, and £229,000 in Colton.

A lack of supply is driving up prices in beautiful Edinburgh, and for this reason Nick Whitten, of JLL, believes that they are likely to grow by 5 per cent in 2017 and by 23 per cent by 2021. Prices start at about £160,000 for a one-bedroom flat. Although there are several significant regeneration schemes on the cards that will deliver necessary new homes in the city, Whitten says that most will not be ready until 2020. “However, the seven-and-a-half-acre New Waverley and 1.7 million square foot Edinburgh St James regeneration schemes are transforming a large area of the city centre,” he adds.

The city has enjoyed extraordinary price growth of 61 per cent in the past five years, but there is still plenty in Cambridge’s tank, according to Martin Walshe, the director of the estate agency Cheffins. He describes the market as “incredibly healthy”, and expects price growth of about 5 per cent next year. “If we have a strong Brexit deal, I forecast a return to the days of price growth at astronomical levels,” he says. “If Europe drives a harder bargain, Cambridge prices will grow, but probably in a more sustainable manner.” All eyes are on the north of the city thanks to Cambridge North station near the Science Park, which is scheduled to open in May.

Already close to the Jaguar Land Rover factory, Garston will benefit from jobs created by the expansion of Liverpool airport. It has a station, with services to the city centre taking about ten minutes. Stuart Law, the chairman of Assetz Property, expects price rises of 10 per cent over the next three to four years. “A two-bedroom flat costs about £90,000 and Assetz expects that to be £100,000 by the end of 2019,” he says. He expects that three-bedroom homes, which are averaging £150,000, will increase to £170,000 in the same period.

Other areas on the way up

Electrification of the train line to Manchester by December 2017 will make this junior partner in the Northern Powerhouse a more commuter-friendly option.

These are two desperately pretty villages three miles from Didcot Parkway station. Electrification of the Great Western train line will reach Didcot by the end of 2017, making the London commute faster.

With 10,000 new homes, 5,000 more on the cards and the possibility of a Crossrail 2 station, this is the London suburb du jour, says Camilla Dell, the managing partner at Black Brick.

This commuter town is getting a shot in the arm in the shape of a £240 million regeneration. The Lexicon shopping and leisure centre opens in September.

Planning consent has been granted for 4,000 homes in this growing cathedral city. Humberts forecasts that prices could increase by £35,000 a year in the short and medium term.

Plans for 25,000 new homes, two new stations and a railway hub make this industrial wasteland the capital’s biggest regeneration project since Stratford. The knock-on benefits should be felt in the surrounding areas of Park Royal, North Acton and Willesden Junction, where pretty railway cottages cost between £500,000 and £600,000.

Work on the £450 million Royal Pier Waterfront development, featuring homes, shops, restaurants, a casino and hotel, will start in 2017.