“With buyers and sellers still digesting what is going on, the UK housing market is a mix of those carrying on and those taking time to reflect – and mortgage status is playing a big part in that.”

What’s next for the UK luxury property market?

“With buyers and sellers still digesting what is going on, the UK housing market is a mix of those carrying on and those taking time to reflect – and mortgage status is playing a big part in that.”

Increasing mortgage costs and the wider cost-of-living crisis are now beginning to exert significant downward pressures on a rampant housing market that’s soared 23% since the onset of COVID-19 pandemic1.

“We’ve just experienced once-in-a-generation wealth creation through property, especially outside London, and with the cost of living and borrowing increasing a degree of correction is likely to take place – however, it’s also worth noting that there is still a supply problem, especially in London,” says Stephen Moroukian, Head of Product and Proposition for Real Estate Financing at Barclays Private Bank.

Britain’s mortgage burden, or the proportion of income spent on mortgage repayments, is another red-light flashing for the UK property market – with the average mortgaged household now left with “little or no wiggle room in their budgets”, according to UK Finance2. Estate agents are also busily revising their forecasts, with Knight Frank now expecting price falls of 10% over the next two years. While recent data from Zoopla suggests that demand for homes in the UK has fallen by a fifth since the mini budget3.

However, this cooling of the market is not expected to be uniform and across the board. It’s more nuanced than that.

Some of the UK’s high-end property markets could be better positioned to ride out any market uncertainty.

The dynamics of the prime central London market are a case in point. Wealthy buyers there tend to be cash-rich – two-thirds of all transactions in the golden postcodes of prime central London are purchased outright, according to the latest Savills deal-book data4 – while the capital’s high-end apartments and houses have long been a magnet for foreign investors, especially those now looking to use the strong US dollar to find good deals in the UK thanks to the weaker pound.

It’s also been a subdued market in recent times. Average prices in prime central London are still 13% below their 2014 peak5; by comparison, property prices across the rest of the UK have increased by more than 50% over the same period, and now stand at all-time highs6.

Prior to 2014, however, prime central London property unabashedly outperformed – generating returns of 300% in just two decades7. But it’s been something of a slog these last eight years. Everything from Brexit to tax burdens, a wide-spread escape to the country during COVID-19 and then the slow post-pandemic return of foreign buyers. Yet prices are now finally ticking upwards once again on the lure of London and return of city living, with annual growth of 2.3%, according to Savills8, despite a war in Ukraine and the uncertain economic backdrop.

“Obviously, any further recovery may now be put on hold due to the rising cost of debt and what it means for the wider economy – and if there’s a prolonged slowdown in activity – but prime central London property still remains pretty compelling especially if you’re buying in US dollars,” says Lucian Cook, Head of Residential Research at Savills.

Recent data from Knight Frank estimated that the effective discounts for US dollar buyers – or those from countries with currencies pegged to the US dollar, such as Hong Kong and many parts of the Middle East – are as much as 50% when compared to 2014 levels, with the largest discounts to be had on properties in Kensington, Chelsea and Notting Hill5. 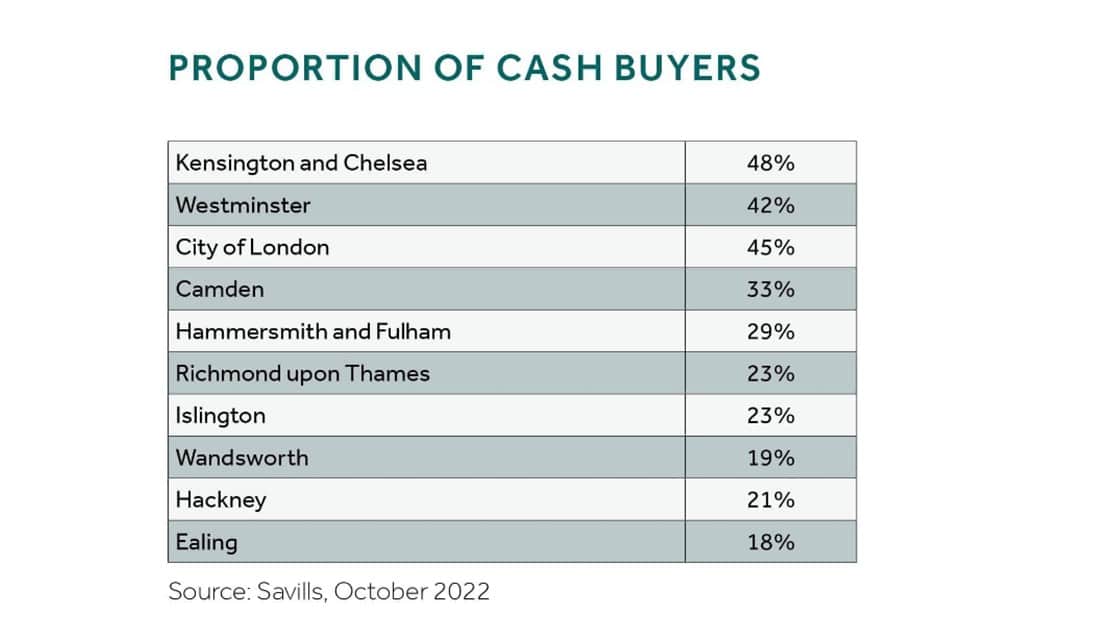 But it’s the more domestic-oriented markets, where most homeowners have mortgages, that could experience significant price reductions in the months ahead.

“If you take Fulham as an example, and I really like the area, in the last financial crisis it was Fulham and areas like that which took the biggest price hits,” says Camilla Dell, Founder of central London buying agency Black Brick.

“It’s a very domestic market, with most people who buy taking on debt. All the properties and streets look broadly the same, with properties priced between £1.5 million and £3 million. But we think it’s these markets that are vulnerable to rising mortgage rates – with people not buying, and people needing to sell and lowering their prices in order to sell.”

The crunch from rising rates

During the era of ultra-low interest rates, it often made financial sense for someone who could afford to buy a property to take out a mortgage instead – to not only help with tax planning, but also so that assets were not locked up in property.

But with mortgage rates pushing up to 15-year highs, it may now be worth considering different strategies.

“There are a lot of factors at play right now,” says Cook at Savills. “It’s creating a mixed picture for what’s motivating buyers and sellers, and it’s all affecting relative spending power. That’s why good communication with your lender is absolutely crucial.”

London’s high-end rental market has also seen something of a resurgence in the last 12 months – characterised by high demand, low stock and the return of overseas tenants. Average monthly rents are up 15.8% on last year, according to Rightmove9.

“Rents took quite a hit during the pandemic in central London,” says Dell at Black Brick. “But there’s a complete reversal of that trend now. The good news is that if you’re a landlord and don’t have much debt, you’re probably going to see some healthy returns coming through your property.

“And for those people looking at their options if they’re about to sell their house – becoming an accidental landlord and letting out their property could now be a tempting option especially with a weaker sales market.”

How likely is a house price crash?

UK house prices have suffered only two significant corrections in the last 40 years10. During the early 1990s recession with interest rates spiralling, house prices fell by more than a third11. While the great financial crisis of 2007-09 then wiped 20% off the value of UK property in just 18 months11.

But despite these shocks, UK house prices have been on something of a remarkable trajectory these last four decades – rising a staggering 1,300%10, six times the rate of inflation12. As history shows, the boom times certainly outweigh the busts (albeit past performance is never a guarantee of future performance).

The UK property market has a history of resilience. During the height of the pandemic, there were dire warnings from the Bank of England that property prices could crash following a near-total shutdown of the market13 – but not even COVID-19 could cool the red-hot market that followed. And as the pandemic has also shown, mortgage lenders now have more tools at their disposal that suggest they could act in similar ways again to curb the severity of any future downturn.

“There are good reasons why the impact on the market may not be as severe as in previous downturns,” adds Cook at Savills. “Lenders have learnt lessons from the pandemic and indeed from the 1990s. Mortgage affordability has also been stress-tested, so banks know homeowners should be able to absorb much of the impact of higher interest rates, even if they need to change their spending patterns.

“The key variable is how far rates go up and how long they stay there. If things stay higher for longer, there’ll be more stress on household finances for a longer period. But we’re still a little way away from that and before we make those judgement calls, we need to see how the mortgage market settles down, and how lenders respond.”