The play’s the thing: developers appeal to culture vultures by building theatres right next door to home

“We are used to having a community and chatting to our neighbours, and want to carry on doing that,” says Sarah. “As well as being close to a good theatre.” 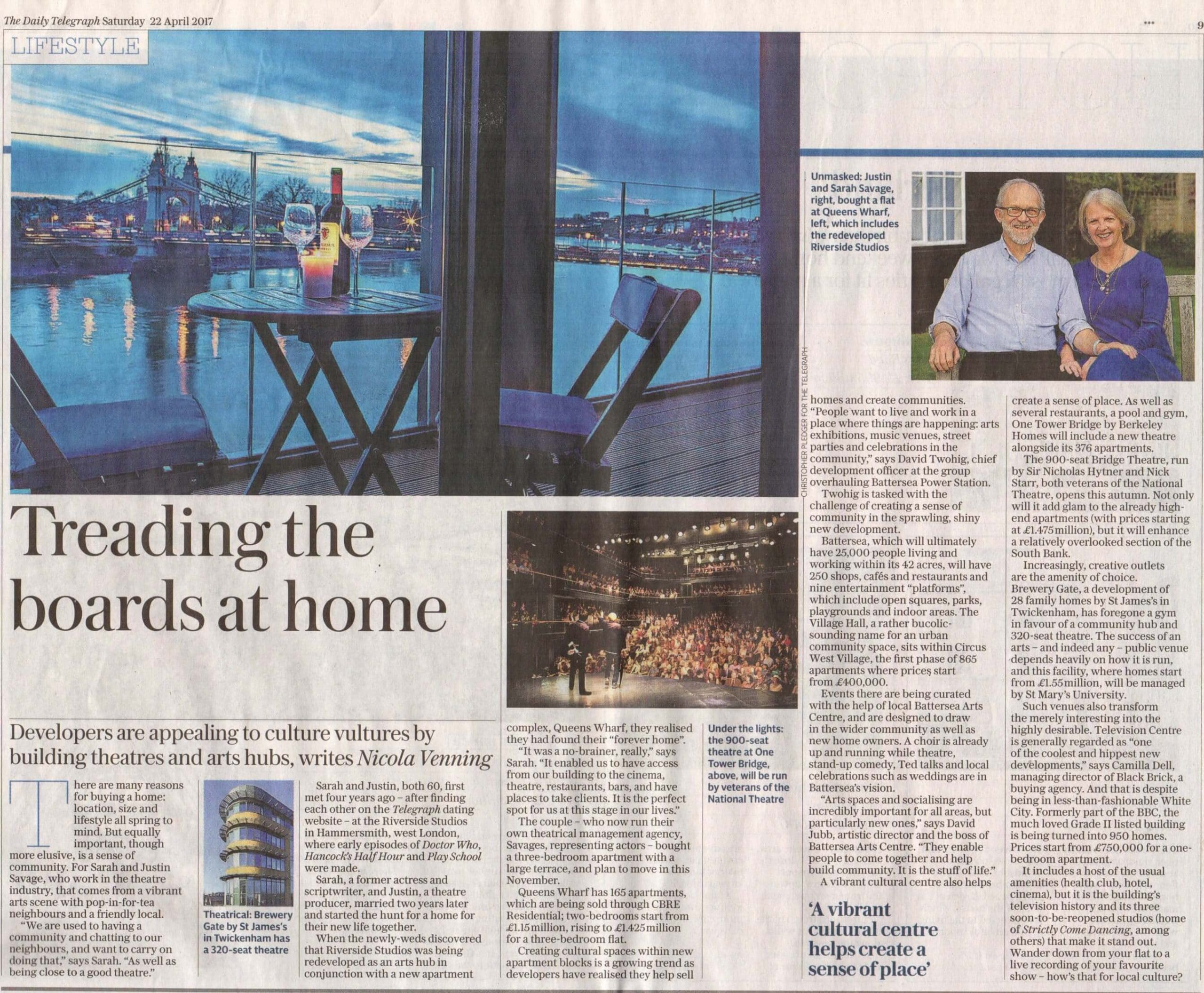 Sarah and Justin, both 60, first met four years ago – after finding each other on the Telegraph dating website – at the Riverside Studios in Hammersmith, west London, where early episodes of Doctor Who, Hancock’s Half Hour and Play School were made.

Sarah, a former actress and scriptwriter, and Justin, a theatre producer, married two years later and started the hunt for a home for their new life together.

When the newly-weds discovered that Riverside Studios was being redeveloped as an arts hub in conjunction with a new apartment complex, Queens Wharf, they realised they had found their “forever home”.
“It was a no-brainer, really,” says Sarah. “It enabled us to have access from our building to the cinema, theatre, restaurants, bars, and have places to take clients. It is the perfect spot for us at this stage in our lives.”
The couple – who now run their own theatrical management agency, Savages, representing actors – bought a three-bedroom apartment with a large terrace, and plan to move in this November.

A flat at Queens Wharf, sold through CBRE Residential. Two-bedrooms start from £1.15 million, rising to £1.425 million for a three-bedroom flat

Queens Wharf has 165 apartments, which are being sold through CBRE Residential; two-bedrooms start from £1.15 million, rising to £1.425 million for a three-bedroom flat.

Creating cultural spaces within new apartment blocks is a growing trend as developers have realised they help sell homes and create communities. “People want to live and work in a place where things are happening: arts exhibitions, music venues, street parties and celebrations in the community,” says David Twohig, chief development officer at the group overhauling Battersea Power Station.
Twohig is tasked with the challenge of creating a sense of community in the sprawling, shiny new development.

Arts spaces and socialising are incredibly important for all areas, but particularly new ones. They enable people to come together and help build community. It is the stuff of life David Jubb, artistic director and the boss of Battersea Arts Centre.

Battersea, which will ultimately have 25,000 people living and working within its 42 acres, will have 250 shops, cafés and restaurants and nine entertainment “platforms”, which include open squares, parks, playgrounds and indoor areas. The Village Hall, a rather bucolic-sounding name for an urban community space, sits within Circus West Village, the first phase of 865 apartments where prices start from £400,000.

Events there are being curated with the help of local Battersea Arts Centre, and are designed to draw in the wider community as well as new home owners. A choir is already up and running while theatre, stand-up comedy, Ted talks and local celebrations such as weddings are in Battersea’s vision.

“Arts spaces and socialising are incredibly important for all areas, but particularly new ones,” says David Jubb, artistic director and the boss of Battersea Arts Centre. “They enable people to come together and help build community. It is the stuff of life.”
A vibrant cultural centre also helps create a sense of place. As well as several restaurants, a pool and gym, One Tower Bridge by Berkeley Homes will include a new theatre alongside its 376 apartments.

The 900-seat Bridge Theatre, run by Sir Nicholas Hytner and Nick Starr, both veterans of the National Theatre, opens this autumn. Not only will it add glam to the already high-end apartments (with prices starting at £1.475 million), but it will enhance a relatively overlooked section of the South Bank.

Increasingly, creative outlets are the amenity of choice. Brewery Gate, a development of 28 family homes by St James’s in Twickenham, has foregone a gym in favour of a community hub and 320-seat theatre. The success of an arts – and indeed any – public venue depends heavily on how it is run, and this facility, where homes start from £1.55 million, will be managed by St Mary’s University.

Such venues also transform the merely interesting into the highly desirable. Television Centre is generally regarded as “one of the coolest and hippest new developments,” says Camilla Dell, managing director of Black Brick, a buying agency. And that is despite being in less-than-fashionable White City. Formerly part of the BBC, the much loved Grade II listed building is being turned into 950 homes. Prices start from £750,000 for a one-bedroom apartment.

It includes a host of the usual amenities (health club, hotel, cinema), but it is the building’s television history and its three soon-to-be-reopened studios (home of Strictly Come Dancing, among others) that make it stand out. Wander down from your flat to a live recording of your favourite show – how’s that for local culture?