It’s hard not to think about the Monopoly board when considering what the most salubrious areas are in London. Park Lane and Mayfair may be the highest prized, but in reality, they’re being outstripped by a train station.

Focus on Marylebone: No longer a modest pocket of London, W1U is now as expensive as Mayfair

It’s hard not to think about the Monopoly board when considering what the most salubrious areas are in London. Park Lane and Mayfair may be the highest prized, but in reality, they’re being outstripped by a train station.
Over the past 12 months, Marylebone has been the top performing area in Prime Central London, according to data by Knight Frank. From March 2016 to March 2017, house prices have risen by 0.7 per cent, which may not sound like much until you factor in that prices have dropped by 6.4 per cent on average across PCL.

“During a more challenging market, we found that buyers look outside their traditional locations,” says Christian Lock-Necrews, partner and office head for Knight Frank’s local branch. “Many found Marylebone in that period to be an area of London that represented best in class properties in a central London location, yet it allowed them to get more for their money than Mayfair or Knightsbridge.”

Indeed, Knight Frank’s report found that UK buyers were generally downsizing from Hampstead and Highgate or relocating from Mayfair, with some agents now saying it’s more popular than the toast of the Monopoly board.

“Marylebone used to be the ‘forgotten’ postcode and property prices were typically 30 per cent lower than Mayfair,” says Camilla Dell, managing partner at buying agency Black Brick. “There is now very little difference in pricing between the two.” 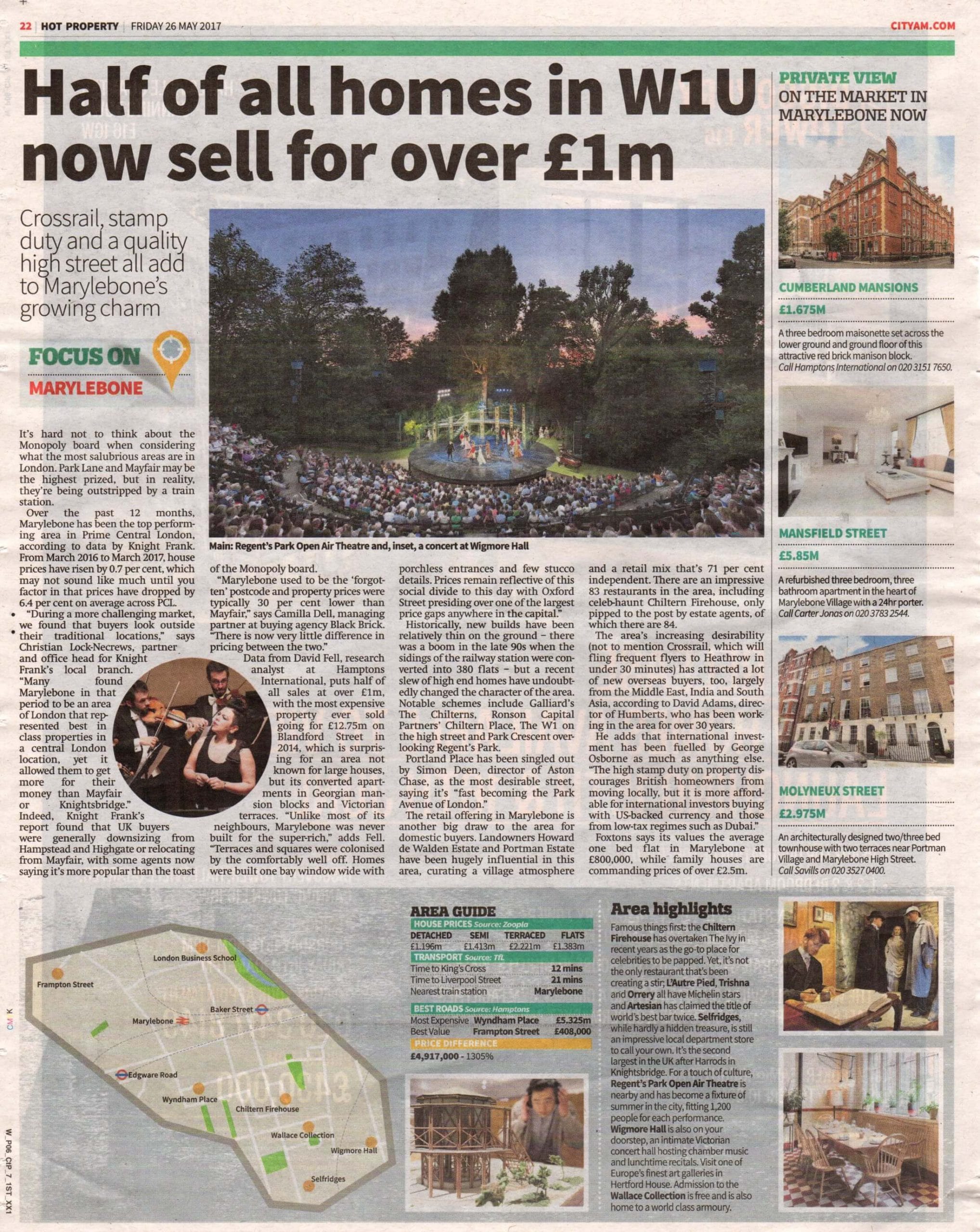 Data from David Fell, research analyst at Hamptons International, puts half of all sales at over £1m, with the most expensive property ever sold going for £12.75m on Blandford Street in 2014, which is surprising for an area not known for large houses, but its converted apartments in Georgian mansion blocks and Victorian terraces.

“Unlike most of its neighbours, Marylebone was never built for the super-rich,” adds Fell. “Terraces and squares were colonised by the comfortably well off. Homes were built one bay window wide with porchless entrances and few stucco details. Prices remain reflective of this social divide to this day with Oxford Street presiding over one of the largest price gaps anywhere in the capital.”

Historically, new builds have been relatively thin on the ground – there was a boom in the late 90s when the sidings of the railway station were converted into 380 flats – but a recent slew of high end homes have undoubtedly changed the character of the area. Notable schemes include Galliard’s The Chilterns, Ronson Capital Partners’ Chiltern Place, The W1 on the high street and Park Crescent overlooking Regent’s Park.
Portland Place has been singled out by Simon Deen, director of Aston Chase, as the most desirable street, saying it’s “fast becoming the Park Avenue of London.”

The retail offering in Marylebone is another big draw to the area for domestic buyers. Landowners Howard de Walden Estate and Portman Estate have been hugely influential in this area, curating a village atmosphere and a retail mix that’s 71 per cent independent. There are an impressive 83 restaurants in the area, including celeb-haunt Chiltern Firehouse, only pipped to the post by estate agents, of which there are 84.

The area’s increasing desirability (not to mention Crossrail, which will fling frequent flyers to Heathrow in under 30 minutes) has attracted a lot of new overseas buyers, too, largely from the Middle East, India and South Asia, according to David Adams, director of Humberts, who has been working in the area for over 30 years.
He adds that international investment has been fuelled by George Osborne as much as anything else. “The high stamp duty on property discourages British homeowners from moving locally, but it is more affordable for international investors buying with US-backed currency and those from low-tax regimes such as Dubai.”
Foxtons says its values the average one bed flat in Marylebone at £800,000, while family houses are commanding prices of over £2.5m.

Area highlights
Famous things first: the Chiltern Firehouse has overtaken The Ivy in recent years as the go-to place for celebrities to be papped. Yet, it’s not the only restaurant that’s been creating a stir; L’Autre Pied, Trishna and Orrery all have Michelin stars and Artesian has claimed the title of world’s best bar twice. Selfridges, while hardly a hidden treasure, is still an impressive local department store to call your own. It’s the second largest in the UK after Harrods in Knightsbridge. For a touch of culture, Regent’s Park Open Air Theatre is nearby and has become a fixture of summer in the city, fitting 1,200 people for each performance. Wigmore Hall is also on your doorstep, an intimate Victorian concert hall hosting chamber music and lunchtime recitals. Visit one of Europe’s finest art galleries in Hertford House. Admission to the Wallace Collection is free and is also home to a world class armoury.