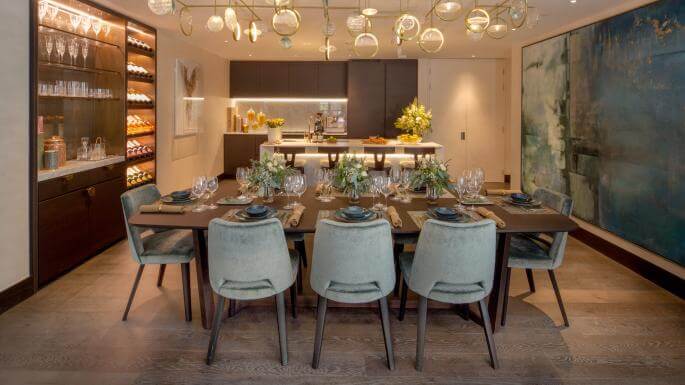 The Mansion development by Clivedale is just to the north of Oxford Street, close to Marylebone, in central London. Apartment prices start at £4.95 million.

Last week we brought you the regional locations where the food revolution is fuelling buyers’ appetites. In the country, nothing adds value to a property like an award-winning village pub or a bustling farmers’ market within walking distance. This week we focus our attention on London.

Part of the old BHS on Oxford Street will reopen in the summer, not as a department store, or a cheap sportswear outlet, but as an indoor market, brimming with producers, retailers, restaurants, street-food vendors, four bars, event spaces and a demo kitchen. It belongs to the chain Market Halls, which is opening branches across the capital and regionally, including one in York in late spring.

Its expansion underlines the growing relationship between decent food outlets and a postcode’s popularity. Take, for example, Borough Market in southeast London. Southwark has grown dramatically in popularity since this foodie paradise appeared 15 years ago.

However, is it the eateries that attract the residents, or vice versa? It’s a debate that the residents of Islington have been chewing over for decades, with the restaurants of Upper Street contributing to a Georgian terraced house in NW1 being able to command an average of £1.38 million.

Whatever the answer, it’s a trend that other areas of London are rapidly emulating. “An army marches on its stomach and the march of some of London’s coolest neighbourhoods is being driven by great food,” says Nick Dawson, an associate at Garrington property finders. “Shoreditch in east London is a shining example. The formerly down-at-heel neighbourhood is a hotbed of tech start-ups, with a bohemian vibe and new restaurants and bars opening. For a three-bedroom property in Shoreditch you can expect to pay £1 million on average, but this is still nearly a third cheaper than the likes of Soho and Covent Garden.” Speaking of value for money, Bethnal Green (where the average price of a flat is £512,102) and Hackney Wick (£522,298) are good examples of areas getting an upgrade to their traditional offering of greasy spoons as buyers move eastwards in search of affordability. “These may offer a slightly more eclectic feel, but they do have an abundance of artisan breweries and cheesemakers,” Dawson says. 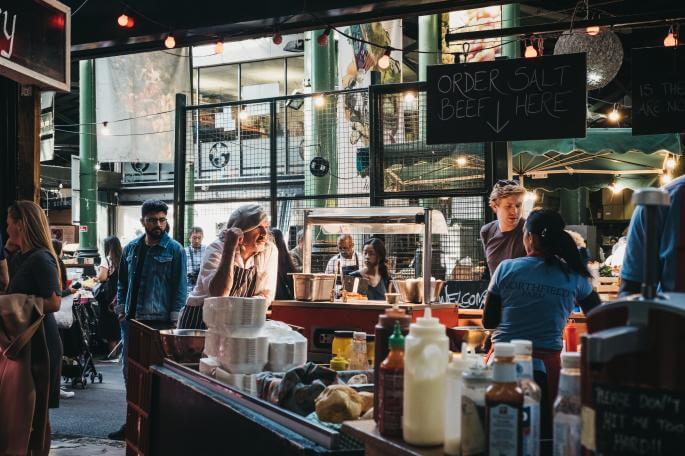 Tom Kain, a buying consultant for Black Brick, a property agency, adds Brixton and Bermondsey to the list. “These are good examples of areas that have rapidly become more gentrified,” he says. “And a large part of the gentrification is fuelled by the food markets. Many young professionals and families relish the pop-up foodie outlets found in Brixton Village and Maltby Street Market in Bermondsey. It certainly is a draw card.”

A main factor is the surge in healthy and organic eating. Katy Brookes, a sales manager at Foxtons in Muswell Hill, says that a popular spot for north London’s health-conscious is Planet Organic, open until 9.30pm to welcome weary commuters desperate for a Fatigue Fighter (apple, beetroot, orange, celery and ginger) fix.

Her colleague, David Busson, says that the farmers’ market in nearby Stoke Newington helps to create a sense of community and marks the area out from its neighbours. Stoke Newington, with an average price of £653,804, is more expensive than Stamford Hill (£570,416), Upper Clapton (£506,292) and Clapton Common (£510,760). “All the produce comes from within 100 miles of Hackney,” Busson says.

And if you’re wondering where the next hot meal might be coming from, Dawson advises looking northwest. “Queen’s Park is one to watch, with gentrification spreading into the less-affluent areas of Kilburn and Willesden and creating strong demand for fine dining,” he says. “With investment in Queen’s Park on the rise — and family upsizers continuing to move in from Notting Hill and St John’s Wood — this is a foodie haven that might be worth getting in on now.”