The debate continues about the future of the housing market, with one economist forecasting disaster, while others believe that the average property price will rise this year. These predictions come as house price indices provide evidence of a slowdown.

Strategies to survive a price slowdown

Strategies to survive a price slowdown

Spooked by forecasts of a market fall? Keep calm and take the chance to find your dream home

The debate continues about the future of the housing market, with one economist forecasting disaster, while others believe that the average property price will rise this year. These predictions come as house price indices provide evidence of a slowdown. Figures released by the Office for National Statistics and the Land Registry show that average house prices rose by 4.1 per cent in the year to March, the slowest pace of growth since October 2013.

In London, particularly in the prime sector, there has been a marked shift in price gains. The most recent index from Nationwide shows annual growth falling to 1.2 per cent in the capital, the second slowest pace of the 13 UK regions and the weakest rate of growth since 2012.

Robert Gardner, Nationwide’s chief economist, says a squeeze on household incomes and the country’s uncertain economic and political outlook is to blame. Lucian Cook, the head of Savills residential research, says: “We are expecting a weaker market driven by needs-based buyers, who are less likely to compromise. The best insurance against a weaker market is to avoid properties that are blighted, for example, by road or aircraft noise, or where a garden is too small for the size of the house. I’d also recommend buying in the best location you can afford.” 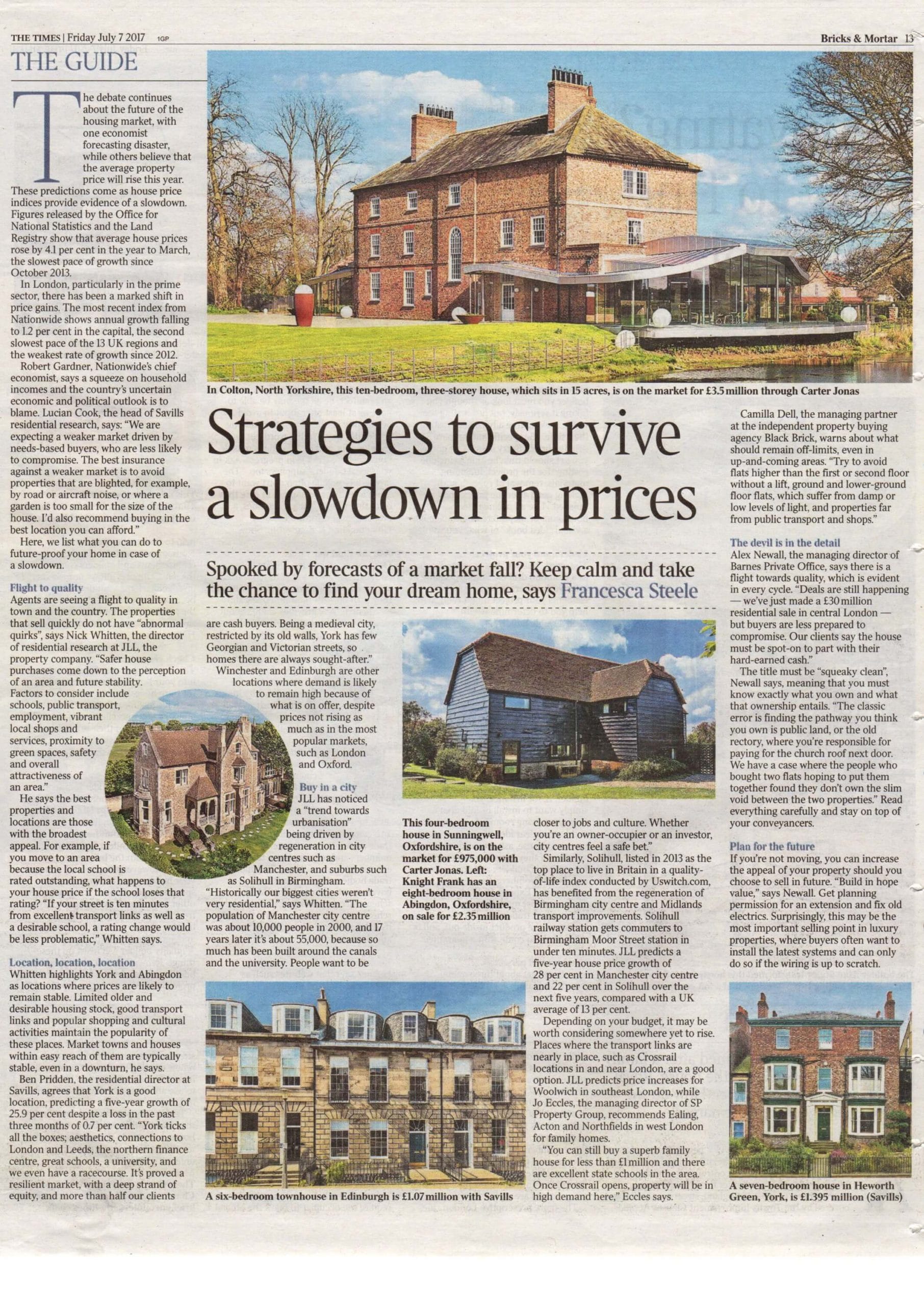 Here, we list what you can do to future-proof your home in case of a slowdown.

Flight to quality Agents are seeing a flight to quality in town and the country. The properties that sell quickly do not have “abnormal quirks”, says Nick Whitten, the director of residential research at JLL, the property company. “Safer house purchases come down to the perception of an area and future stability. Factors to consider include schools, public transport, employment, vibrant local shops and services, proximity to green spaces, safety and overall attractiveness of an area.”

He says the best properties and locations are those with the broadest appeal. For example, if you move to an area because the local school is rated outstanding, what happens to your house price if the school loses that rating? “If your street is ten minutes from excellent transport links as well as a desirable school, a rating change would be less problematic,” Whitten says.

Location, location, location Whitten highlights York and Abingdon as locations where prices are likely to remain stable. Limited older and desirable housing stock, good transport links and popular shopping and cultural activities maintain the popularity of these places. Market towns and houses within easy reach of them are typically stable, even in a downturn, he says.

Ben Pridden, the residential director at Savills, agrees that York is a good location, predicting a five-year growth of 25.9 per cent despite a loss in the past three months of 0.7 per cent. “York ticks all the boxes; aesthetics, connections to London and Leeds, the northern finance centre, great schools, a university, and we even have a racecourse. It’s proved a resilient market, with a deep strand of equity, and more than half our clients are cash buyers. Being a medieval city, restricted by its old walls, York has few Georgian and Victorian streets, so homes there are always sought-after.”

Winchester and Edinburgh are other locations where demand is likely to remain high because of what is on offer, despite prices not rising as much as in the most popular markets, such as London and Oxford.

Buy in a city JLL has noticed a “trend towards urbanisation” being driven by regeneration in city centres such as Manchester, and suburbs such as Solihull in Birmingham. “Historically our biggest cities weren’t very residential,” says Whitten. “The population of Manchester city centre was about 10,000 people in 2000, and 17 years later it’s about 55,000, because so much has been built around the canals and the university. People want to be closer to jobs and culture. Whether you’re an owner-occupier or an investor, city centres feel a safe bet.”

Similarly, Solihull, listed in 2013 as the top place to live in Britain in a quality-of-life index conducted by Uswitch.com, has benefited from the regeneration of Birmingham city centre and Midlands transport improvements. Solihull railway station gets commuters to Birmingham Moor Street station in under ten minutes. JLL predicts a five-year house price growth of 28 per cent in Manchester city centre and 22 per cent in Solihull over the next five years, compared with a UK average of 13 per cent.

Depending on your budget, it may be worth considering somewhere yet to rise. Places where the transport links are nearly in place, such as Crossrail locations in and near London, are a good option. JLL predicts price increases for Woolwich in southeast London, while Jo Eccles, the managing director of SP Property Group, recommends Ealing, Acton and Northfields in west London for family homes.

“You can still buy a superb family house for less than £1 million and there are excellent state schools in the area. Once Crossrail opens, property will be in high demand here,” Eccles says.

Camilla Dell, the managing partner at the independent property buying agency Black Brick, warns about what should remain off-limits, even in up-and-coming areas. “Try to avoid flats higher than the first or second floor without a lift, ground and lower-ground floor flats, which suffer from damp or low levels of light, and properties far from public transport and shops.”

The devil is in the detail Alex Newall, the managing director of Barnes Private Office, says there is a flight towards quality, which is evident in every cycle. “Deals are still happening — we’ve just made a £30 million residential sale in central London — but buyers are less prepared to compromise. Our clients say the house must be spot-on to part with their hard-earned cash.”

The title must be “squeaky clean”, Newall says, meaning that you must know exactly what you own and what that ownership entails. “The classic error is finding the pathway you think you own is public land, or the old rectory, where you’re responsible for paying for the church roof next door. We have a case where the people who bought two flats hoping to put them together found they don’t own the slim void between the two properties.” Read everything carefully and stay on top of your conveyancers.

Plan for the future If you’re not moving, you can increase the appeal of your property should you choose to sell in future. “Build in hope value,” says Newall. Get planning permission for an extension and fix old electrics. Surprisingly, this may be the most important selling point in luxury properties, where buyers often want to install the latest systems and can only do so if the wiring is up to scratch.