Knightsbridge isn’t usually somewhere to shop on a budget but this year one lucky home hunter might pick up a three-bedroom apartment on Walton Street — valued at more than £3m — for £10.

A Knightsbridge flat for £10? 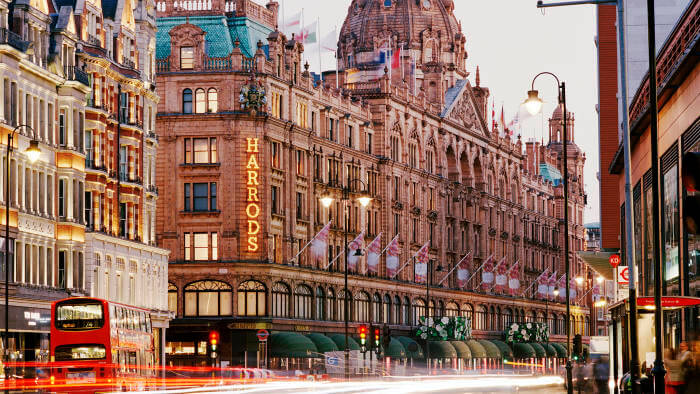 Knightsbridge isn’t usually somewhere to shop on a budget but this year one lucky home hunter might pick up a three-bedroom apartment on Walton Street — valued at more than £3m — for £10.

All he or she need do is beat a few hundred thousand other hopefuls in a cricketing “spot-the-ball” competition. As well as a share of the freehold, the winner of the property will have stamp duty paid and receive a matte-black Jeep.

“It’s a sexy house,” says Santa Agolli, founder of Your Laddr, which is organising the competition. “It’s next to Harrods, it’s a dream lifestyle.” This property event is launching her business: Your Laddr will eventually offer a range of homes through the same form of competition.

“For 10 quid, why not have a go?” asks Noel De Keyzer, director of Savills’ local office. The average sale price of Knightsbridge flats in 2017 was just over £3m, with houses close to £5m, according to data from LonRes. The 1 in 380,000 chance offered by Your Laddr might be more appealing than ponying up the actual costs. 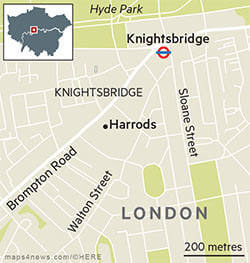 “So long as the scheme involves a sufficient element of skill, judgment or knowledge, ‘spot-the-ball’ competitions can operate lawfully in the UK without the need for an operating licence,” says David Copping at Farrer & Co, the law firm. He adds, however, that if prizes can be awarded on the basis of pure luck or guesswork, the competition is likely to be subject to regulation by the Gambling Commission.

Local agents describe the competition as a gimmick, but vendors may be open to new ideas. Prices are down 15 per cent since 2014, according to LonRes, and homes that did sell last year spent an average of 157 days on the market, with 45 per cent having their prices cut.

Like other affluent London neighbourhoods, Knightsbridge has been hit by what De Keyzer calls “Osborne’s changes” — the stamp duty reforms introduced by the former chancellor, which first raised the bill on properties costing more than £937,500 and then added a 3 per cent premium to all second homes. “People have not adjusted to the changes we’ve seen over the past 18 months,” he says. “[The vendors] might not have been able to shift the apartment the conventional way.”

“As a buyer you can’t afford to make a mistake if you’re paying 10-15 per cent in stamp duty,” says Harry Dawes, head of Knight Frank’s Knightsbridge office. The caution has been palpable among Knight Frank’s customers: “At the peak of 2014 we were averaging 18 viewings per offer, now it’s around 45,” says Dawes. 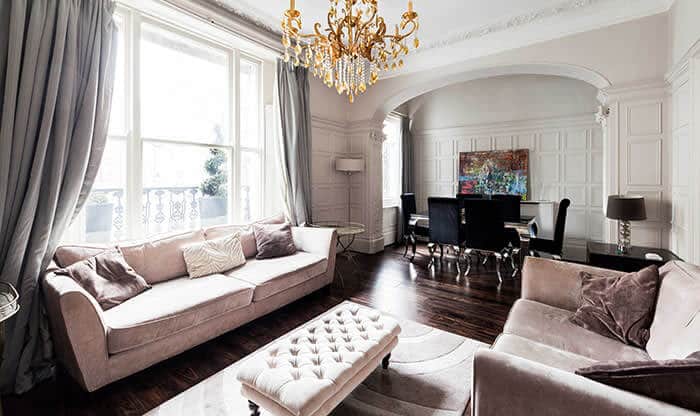 Apartment on Walton Street, valued at £3.2m, which is the prize in Your Laddr’s ‘spot-the-ball’ competition © Frederick Ardley

“Our register in the Knightsbridge office has never been so low,” says De Keyzer. “We’ve seen transaction numbers at the top end [on properties valued at £5m and above] down by 40 to 50 per cent.”

Discretionary buyers have been discouraged by the stuttering market and many have become renters until confidence returns. Buying agent Camilla Dell has an alternative explanation: “Knightsbridge is not the desirable postcode it once was,” she says. “A lot of my clients say Knightsbridge has lost a lot of its gloss.” Even Middle Eastern buyers — so established in the area that Harrods is now an asset of the Qatari state — are venturing to the garden squares of Belgravia and Mayfair, she says.

Before the downturn, Knightsbridge had been on a streak. The area straddles Kensington & Chelsea and the City of Westminster — the two best-performing markets in the UK from 2005-2015, according to Savills Residential Research. During that decade, prices there rose 80 per cent or more.

One reason for the boom was a series of super-prime developments, such as The Knightsbridge, 201 residences near Hyde Park. Today, a one-bedroom flat in the development is on sale for £3.495m — more than £4,000 per square foot — with Harrods Estates. 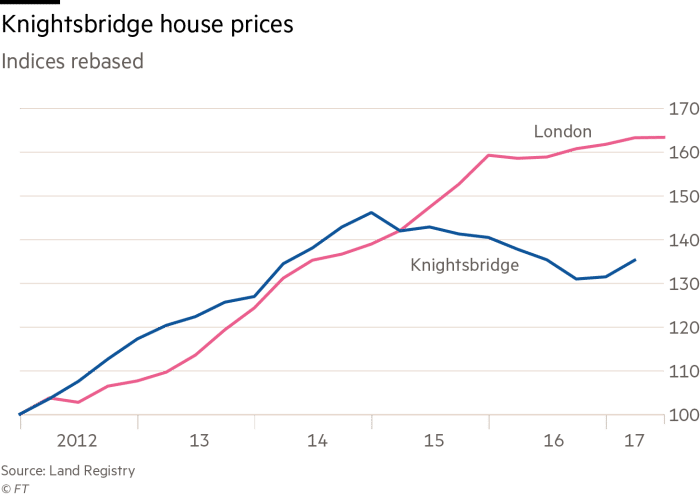 The Knightsbridge was followed in 2011 by One Hyde Park, a Candy brothers development which launched at a headline-grabbing £6,000 per sq ft. “The reputation of One Hyde Park is still head and shoulders above anything else,” says Simon Barry, head of New Residential Developments at Harrods Estates. Dell is less flattering, describing it as “a goldfish bowl”.

The address certainly commands a premium, with a five-bedroom apartment marketed for £50m by Knight Frank. A number of apartments in the development are owned by offshore companies — at last count, it was reported that 20 have purchased homes there in excess of £20m.

Transaction volumes in Knightsbridge have fallen 36 per cent from 2014 levels, according to LonRes, and even a small bounce back last year, when some 26 more homes were sold than in the year before, has done little to raise morale among local agents. For now, finding a ball might be easier than finding a buyer.

£1m A one-bedroom flat opposite Harrods

£7.5m A five-bedroom penthouse in a listed building