Back to the polls again…again

It’s probably fair to say that much of the UK met Prime Minister May’s announcement of a snap general election with a distinct lack of enthusiasm. The surprise poll, on 8 June, will be the UK’s third major vote in two years, and it comes as divisions over the country’s decision to leave the EU remain as bitter as ever. Nonetheless, the election could be a positive for the UK property market, assuming the Conservatives maintain their commanding poll lead and win a larger parliamentary majority. Currently, May’s government has a majority of just 17 seats in the House of Commons, leaving it vulnerable to rebellions within the Tory ranks.

The best outcome for London’s property market would be that a larger Conservative majority would allow May to pursue a softer Brexit. While the UK voted last year to leave the EU, the exact nature of the UK’s post-Brexit relationship with the EU was not on the ballot – and Tory euro-sceptics have been uncompromising in their willingness to sever all ties with Europe if necessary, which would likely cause a large economic shock.

The assumption is that May could negotiate with Brussels more pragmatically if not held hostage by the Tory ultras. The currency markets certainly made that bet, with sterling jumping to a six-month high on the election announcement.

At the time of writing, the parties have not released their manifestos, so it is not known if they plan to review property or related taxes such as inheritance and capital gains tax. Given the country’s fiscal position, however, it is a safe bet to assume that neither major party will campaign to lower taxes in the short-term: on the contrary, the Conservatives have signaled that they plan to abandon the prior Tory manifesto promise not to raise income tax, national insurance contributions or VAT.

“From the point of view of the property market, any election introduces uncertainty, which tends to have a chilling effect on activity,” says Black Brick Managing Partner Camilla Dell. “Fortunately, the short campaign, and the absence of a long build-up before the election was called, means this effect will be limited. Indeed, we have had no requests from clients to put searches on hold. To the extent that the election does encourage some buyers to pause, this would reduce competition for committed purchasers.”

One element of uncertainty introduced by the snap election is an unexpected hiatus in the government’s plans to change the tax treatment of UK residential property owned by non-doms in the UK. Given the lack of parliamentary time before the election, these proposals were dropped from the 2017 Finance Act. According to law firm Charles Russell Speechlys, it is most likely that these reforms will be reintroduced after the election, if the Conservatives win re-election, and they will be backdated to 5 April 2017, when they were slated to come into effect. They may be re-introduced with a later start date, although this would cause complications in terms of providing redress for those who have incurred costs meeting the original timetable. Also, given recent political volatility, the law firm does not discount the possibility of an electoral upset that will see the reforms not enacted or substantially changed.

For those non-doms who have already taken action, the firm recommends that they wait and see what the outcome is. For those who have been preparing to do so, the situation is more complex, and requires specialist legal and accounting advice. As ever, we would be delighted to recommend firms that could provide such advice.

Indeed, the positive view of the election is that it could give a fillip to a prime property market that is increasingly seen as having bottomed out. The latest research from Knight Frank, for example, finds demand indicators, sales volumes and price growth all showing “signs of stabilisation” in the first quarter of 2017. It finds a 22% increase in central London properties under offer at the end of February compared with the same time in 2016, with viewings up 25%. Transactions are up 13%. Knight Frank has also seen the same activity as we have reported at the top end of the prime market: it says the number of £20 million-plus deals in the first quarter of 2017 was higher than any other three-month period except the last quarter of 2014, when buyers were rushing to complete before a hike in Stamp Duty.

We are certainly seeing strong demand for properties priced sensibly. For example, 24 new units at Seymour Street, developed by the Portman Estate, were snapped up within days, with minimal advertising, because of the good value they offered (see Acquisition of the Month).

Certainly, the view is that activity is likely to pick up speed after the election, meaning serious buyers might be well advised to get ahead of the crowd.

At the end of this month, Black Brick Partner Caspar Harvard-Walls is travelling to Asia, visiting Singapore from the 29th to the 31st of May, before heading on to Hong Kong for the 1st and 2nd of June. He’ll be meeting with existing and potential clients, banks, accountants, law firms and trust companies. To arrange an appointment, please email caspar.harvard-walls@black-brick.com.

Acquisition of the month – One Seymour Street, W1

In even the toughest markets, the right properties, at the right price, can move fast. Our clients, an Indian family, were looking for a new or renovated pied a terre within walking distance of Hyde Park and Mayfair. Their desire for a concierge, and a budget of £1 million, made the Portman Estate’s One Seymour Place development the perfect solution. However, we had to move fast: with only 24 apartments available, the development – which has 24-hour security, underground parking and access to the gardens and tennis courts of Portman Square – sold out with two weeks, with almost no advertising. However, our connections and ability to move quickly allowed us to secure an apartment for our client for £925,000, or £1,708/sq foot. Most new developments in the area are selling for at least £2,500/sq foot.

Given increased transaction costs in buying prime London property – thanks to hikes in Stamp Duty – a growing number of our clients are choosing to rent before buying, and are taking advantage of our rental search service. Our clients, who were looking for a rental property in Knightsbridge, Kensington & Chelsea, Notting Hill & Holland Park, had had bad experiences with previous tenancies, suffering from noise and overpricing.

We drew up a shortlist of properties, and arranged property tours, before they settled on a newly renovated three-bed apartment overlooking the gardens on one of the most desirable garden squares in Central London. Moreover, we were able to negotiate a £150/week discount, securing the property for £1,600/week.

‘Traditional’ prime central London has been a tough market over the last couple of years, but our clients were resolved to dispose of their Knightsbridge apartment on Sloane Street. However, we were able to tap our network to find a cash buyer directly from one of our trusted contacts, resulting in both a speedy sale, and an excellent sales price at a very healthy £2,385/sq foot. Connections count in difficult markets. 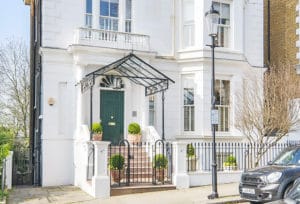 We have been instructed to undertake an off-market sale of an exceptional property – a spectacular white stucco-fronted seven-bedroom detached villa, directly overlooking Holland Park, with two off-street parking spaces. Our client is seeking a discrete sale, so the property, available for £40 million, will not be openly advertised for sale. For more information or to arrange a viewing please contact camilla.dell@black-brick.com.