Down valuations on the up – but not at Black Brick

For some buyers, it can be a nightmare scenario: a price is agreed on their dream property, but the surveyor’s report comes back with a valuation below the asking price. The result? The lender refuses to provide finance for the full amount, leaving the buyer scrambling to cover the difference, or watching the deal fall apart – with the buyer out of pocket on survey and legal fees.

According to recent data, the number of so-called ‘down valuations’ has risen in the past two years from one in 20 to one in five. This is the highest rate since the financial crash in 2008, according to agents from 10 mortgage adviser groups contacted by the BBC’s Victoria Derbyshire programme.

In the current market, this can be a particular issue for buyers purchasing off-plan from new developments. These transactions usually involve the buyer paying 10-20% upfront, with the remainder due at completion, often two or three years after the price is agreed. This raises the risk of price falls meaning that, when the buyer comes to arrange their mortgage, the lender declines to extend a loan that covers the full value of the property.

However, this rise in down valuations has not been something we’ve seen at Black Brick: we have not entered into a single transaction for our clients in recent years where a survey has returned with a valuation revised downwards.

“Coming to an accurate valuation for a property is incredibly difficult for a buyer, especially in the present market,” says Camilla Dell, Managing Partner at Black Brick. “But it can be the difference between securing a mortgage and seeing the deal fall through.”

Too often, estate agents are desperate to get sellers on their books, and are prepared to inflate valuations to do so. In a market where limited supply can generate intense competition for good properties, it’s easy to agree on an asking price that doesn’t stand up to professional scrutiny.

“The Black Brick process involves a much more holistic assessment of a property’s value than is possible using public information, such as that on Zoopla and similar websites,” adds Dell. We have access to more up-to-date information, and form a view based on the nuances of location, aspect and condition of nearby properties that have recently been sold.

“This provides comfort to our clients that they’re getting what they are paying for, and demonstrates the value that professional representation can generate,” she adds.

Economists at PwC forecasts house price growth returning to London in 2020, after a 1.7% fall this year and a 0.2% fall in 2019. Over the following three years, the professional services firm expects price rises totalling 2.6%.

According to Richard Snook, senior economist at PwC, “affordability in the capital has been stretched due to three factors: a high deposit saving hurdle, increased economic uncertainty relating to Brexit acting as a drag on international investment, and reduced numbers of housing transactions due to stamp duty changes.”

PwC’s research echoes the latest data from Savills, which finds that prices in both prime central London and outer prime areas fell 0.9% in the second quarter of 2018, with prime central properties on average 17.6% off their 2014 peak. Year on year, prices are down 3.8%, compared with 4.2% at the end of the first quarter.

However, the estate agent notes that the average conceals huge variation.  The top performing 10% of prime central London properties by price growth have seen prices hold their own in the past year (rising 0.2%) and, at just 1.5% down since 2014, are all but back to their peak values.

At the other end of the spectrum, the weakest 10% of prime homes have lost almost a third (32%) of their value in the same period, falling 7.7% in the past twelve months.

“It is very difficult to generalise about the factors behind this enormous range,” says Lucian Cook, Head of UK Residential Research at Savills. “Rather, performance has been very much property specific. Some of it is down to the size of the property, though that’s not universally the case, some down to condition and some simply down to what is currently fashionable.”

Savills data shows that area isn’t a predictor of performance (aside from Marylebone, which has performed strongly, down just 6.4% since the 2014 peak). Homes in immaculate condition have fallen on average 14.5% since the peak, while those in poor condition have fallen 20.6%, reflecting unwillingness of buyers to take on refurbishment projects. Georgian properties, down 15.6%, have performed better than Edwardian houses, down 23.3% over the period, and properties built between 2010 and 2015 outperformed those built between 2000 and 2010, as tastes and expectations of specification have changed, Savills says.

“The Savills numbers vividly illustrate what we’ve long known – that average figures hide enormous variation in the performance of prime London property,” says Caspar Harvard-Walls, Partner at Black Brick. “It shows the importance of taking advice to give buyers a better chance of avoiding market volatility.”

For all the angst about Brexit and London’s currently slow property market, it’s always worth remembering that, come what may, the city remains a magnet for international investors.

In the second edition of its Active Capital report, estate agency Knight Frank has analysed international real estate investment flows. It notes a gradual return to international capital flows in the sector, with 32% of all transactions by volume involving cross-border purchases in 2017, up from 25% during 2009-2011.

But of particular interest is the rebound of interest in London. In 2015, it was the only market tracked in the report to see a year-on-year decline in cross-border acquisitions, falling 26%. However, in 2017 cross-border flows increased 82%, reaching a new peak. “We expect this trend to continue with a significant volume of activity seen in the first quarter of 2018,” the report says.

London’s real estate market has the second highest proportion of international developers, after Sydney, and the most diverse mix, with Chinese, Hong Kong, Singaporean and US firms all represented in the top 20.

The report notes that this globalisation of developments helps support supply in many cities, injecting funds into domestic developers. This has been particularly the case in London, it says, noting that London mayor Sadiq Khan has said “international investment plays a vital role in providing developers with the certainty and finance they need to increase the supply of homes and infrastructure for Londoners.”

“This very much chimes with our experience at Black Brick,” notes Dell. “Many of our clients are non-UK nationals, who buy property here for any one of a number of reasons – as investments, second homes or pied a terres, due to relocation, or because their children are studying here.

“The attractiveness of London will persist, regardless of the ultimate outcome of the Brexit process.” 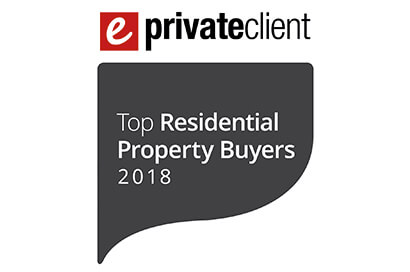 We are very pleased to report that Black Brick has been recognised by two leading industry publications this month.

First, we have been named as one of the 2018 eprivateclient Top Residential Property Buyers. The online publication’s ranking recognises the property buyers who are leading their field, and this is the fourth time Black Brick has been included in this prestigious listing.

Secondly, we have also been featured as a recommended adviser in legal publisher Chambers’ HNW Guide. This is the second year we’ve been featured in the guide, which is aimed at the international high net worth market.

“It’s great to be featured again by these two leading publications,” says Dell. “It’s acknowledgement of the hard work our team puts in meeting the needs of our clients.”

Black Brick Managing Partner Camilla Dell will be visiting Switzerland in September, travelling to Geneva on the 11th and 12th, and Zurich on the 13th. She will be meeting with existing and prospective clients, as well as with private bankers and other advisors to high net worth clients.

If anyone is interested in arranging a meeting with Dell, she can be reached on camilla.dell@black-brick.com.

Our Turkish clients were looking to sell their two-bed London pied-a-terre, in Fordham Court in De Vere Gardens, Kensington, having moved out of the UK. Despite the difficulty in finding a buyer that lives in the area, we were able to identify, through our network of introducers, a buyer who already lives in the building and who was looking for an apartment for their mother.

We managed the price negotiations, securing £1.76 million, or £2,125 per square foot, which represents a premium for the building, and was a particular result for an area where prices have been dropping in recent years. Because our clients are no longer UK based, it was important that we were able to closely manage the sale process. By liaising closely with lawyers, surveyors and valuers, we were able to bring the transaction to a successful conclusion in a timely fashion.

On the market – Cornwall Gardens SW7 and Vale Court SW3

In addition to the services we offer property buyers, we also offer a managed sale service, and we have been recently instructed to sell two prime London properties.

The first is bright, spacious two-bed, two-bath apartment with views across beautiful Cornwall Gardens, a series of quiet garden squares located just off Gloucester Road in the heart of South Kensington. On for £1.35 million, the newly refurbished apartment, with an open-plan kitchen reception, comes with a share of freehold. Kensington High Street, Old Brompton Road and Hyde Park are all within walking distance.

The second is a fantastic one-bedroom apartment in Vale Court, a popular mansion block on Mallord Street in Chelsea. With a guide price of £950,000, the apartment comes with a separate kitchen and living room, and a share of the freehold. It is moments away from the shops, bars and restaurants of the Kings Road.