A 25-metre swimming pool stretches out before us, its immaculate tiles glinting in the soft, artificial light. Empty loungers with untouched, crisply folded towels are dotted around and the air is freshly scented, like an expensive beach club. But this is no beach: we are five floors beneath the rainy grey streets of London’s Knightsbridge.

Why luxury brands want to sell you a home

Wealthy people are being targeted with homes by Porsche, Armani and Bulgari – but are they buying? 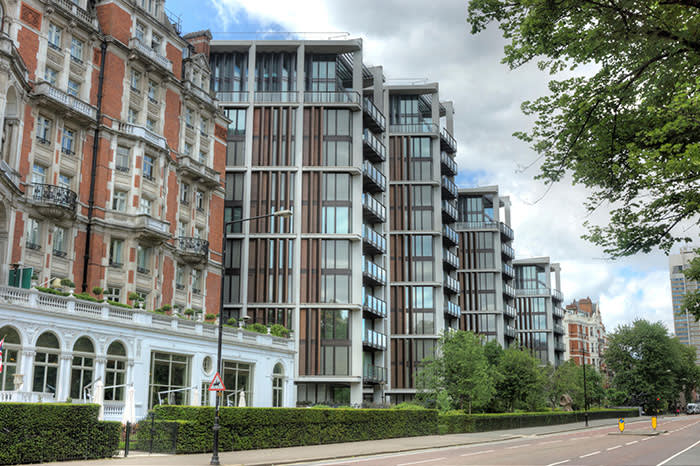 The landmark London residence One Hyde Park: the Candy brothers’ project broke house-price records and made headlines with its lavishness © Alamy.

The Candy brothers’ One Hyde Park in Knightsbridge, serviced by the adjacent Mandarin Oriental hotel and completed in 2009, broke house-price records and made headlines with its shameless opulence. Now a fresh crop of branded homes is entering the London market.

The company behind Hong Kong’s Peninsula hotel is building at least 26 apartments along with a new hotel at Hyde Park Corner, to open next year. Ken Griffin, the US hedge-fund billionaire, has already agreed to buy one for about £100m.

Four Seasons opened a development on Grosvenor Square in 2019. Clivedale is currently building two separate sets of branded residences: 24 homes serviced by the Dorchester hotel on the site of the old Playboy Club next to Hyde Park, and another 80 on Hanover Square with Mandarin Oriental, where prices range from about £2m for a studio apartment to about £25m for a penthouse.

These developments will open their doors to a sluggish market. Many were conceived at the height of the property boom, but for the past four years London’s high-end market has declined; property prices in other major cities, such as New York, are also falling. The enthusiasm for luxury developments has left the prime end oversupplied, even as global cities struggle with shortages of affordable housing.

By the third quarter of 2019, more than 3,100 newly built homes had been completed but not sold in the UK capital, according to the data firm Molior London. This surfeit of choice will test branded developments’ appeal. “Some will sell off-plan, but it will take the experience of walking in there, seeing all the staff bowing and scurrying and smelling the million bloody scented candles [to sell the rest],” says Scarisbrick.

Some developers have quietly changed tack. Reignwood, another developer, had planned to sell 41 residences with prices starting at £5m in the restored Beaux Arts-era building that formerly housed the Port of London Authority close to the Tower of London, and which are serviced by the Four Seasons Hotel in the same building.

But the apartments at 10 Trinity Square have now become part of the hotel’s rental stock, available for short periods or for as long as a year.

Estate agents have suggested the building’s location in the east of the city, away from the glitzier west, was a problem. Four Seasons says: “We recognised a need in the market to serve a different type of hotel guest, those seeking a longer-term stay that would help them feel like a local, but with both the comforts of home and Four Seasons amenities and services.”

Agents had originally publicised six residences for sale at Bulgari’s Knightsbridge location, but just two were constructed, of which only one — Nixon’s home — has an owner listed with the Land Registry. Bulgari declined to comment on the change of plans or ownership. Others are selling well despite the turbulent market: Clivedale says its Dorchester and Mandarin Oriental developments are each two-thirds sold.

Even buying agents, whose trade involves arguing down prime prices on behalf of wealthy clients, say these homes fetch high prices. “[Branded residences] go hand in hand with new-build, which even if it is not branded, fetches a premium anyway. It’s a premium on top of a premium,” says Camilla Dell, founder of the buying agency Black Brick.

Scarisbrick says: “These developments are not showing any signs of this 20 to 25 per cent [prime price] correction that we’ve all been talking about.”

Owners are paying in part for convenience. Spa and gym access are standard, along with hotel security and maintenance, maids, room service and concierge services such as flight booking. Rather than go to the bother of hiring household staff, residents can use those of the hotel, while leaving their possessions in their own home.

Some also offer the option of letting your home through the hotel when you are not using it. Buyers “want something absurdly convenient and comfortable”, says Scarisbrick. 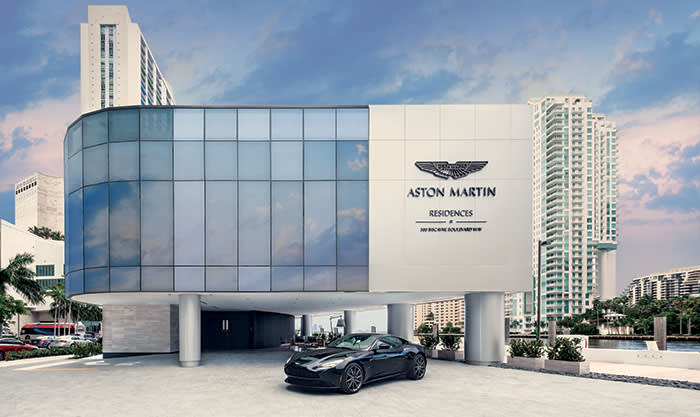 The Aston Martin residences in Miami will be completed in 2022. Whoever buys the $50m Triplex Penthouse wil have access to the last remaining Aston Martin Vulcan.

Technology has made parts of this offering less unusual, however, even as the latest crop of branded residences were being built. Room service in the small hours was once a rare perk; now, notes the Mayfair estate agent Charles McDowell, apps such as Deliveroo and Just Eat have made it a service available to everyone. “The delivery thing has slightly had the wind taken out of its sails,” he says.

But branded residences also sell something less quantifiable. Purchasers of a Four Seasons, Marriott or Mandarin Oriental home are buying into the brand itself: both its nebulous essence and the specific value of a global company with a reputation to uphold. Hence the entry into the market of non-hotel brands, such as luxury goods and automotive marques.

Among the next raft of brands planning to enter the market is Condé Nast, owner of Vogue, GQ, The New Yorker and Vanity Fair, which already runs the GQ Bar in Berlin, the Tatler Club in Moscow and Vogue cafés in four major cities.

The company would not talk to the FT about its specific plans for its residences, but says: “We now view this evolving and expanding branded residential marketplace as a natural next step for our global lifestyle media brands.”

There is also a question of longevity. Brands may hold power now, but the decline of Cadillac, for example, shows the vulnerability even of a marque that once dominated the US luxury car market. Property buyers must be confident that the brand they are buying into has staying power.

Scarlett, of Clivedale, says the developer’s contracts with hotels last for between 30 and 50 years and it works hard to learn the “corporate dialect” of each one. But Paul Tostevin, director of world research at Savills, says he has seen housing developments “change flags” when brands fade.

At the Bulgari Hotel and Residences in Knightsbridge, a huge portrait of Monica Vitti, the Italian actress, hangs on the wall, while a specially made film is screened in the private cinema with clips from movies from La Dolce Vita to Mission: Impossible II that feature Bulgari gems.

The company says the building is intended to evoke the “fun and the colour” of the jewellery brand, along with the “Italian love of life”. For all that, there is a lot of polished mahogany and black leather.

The Bulgari building at least has a distinctive style. Others blend into one: greyish-beige furniture, gold accessories, a lot of leather and marble, inset flatscreens (the Candys’ bid for uniqueness was a golf simulator).

This is perhaps part of the point, as the travelling wealthy seek a sense of safety, an atmosphere they can rely on. But within this growing niche of the housing sector there is intense competition.