The super-prime rent race in London

Renting a high-end property in central London has always required potential tenants to present the best possible credentials to exacting landlords. But, as the UK capital has reawakened to commerce and travel, this ultra-exclusive beauty contest has become even more intense. Richard Davies, head of lettings at estate agent Chestertons, gives the example of wealthy tenants who want to bring their pets into a pristine luxury property — often a tricky sell to landlords. “Pet owners have had to up their game in an already tight market,” he says, “by supplying very detailed information about their pets, usually in a pet résumé that includes information about their grooming regime, behavioural analysis and even details of the pet’s therapists.”

Tenants eyeing super-prime homes in London — defined as those costing £5,000 or more a week to rent — face a combination of ferocious demand and dwindling supply. After a year in which international travel virtually ground to a halt and tenants with deep pockets shunned the apartments that predominate in the “golden postcodes” of prime central London, a rapid recovery in this niche of the market is under way.

Expatriates have begun returning for corporate stints in the city, along with the wealthy families that divide their time between London and other favoured destinations. The resumption of office life is picking up pace, while theatres, galleries and restaurants have reopened their doors. The UK capital is once again asserting its gravitational pull. That means prospective tenants can no longer take their time if they wish to secure a place they want. 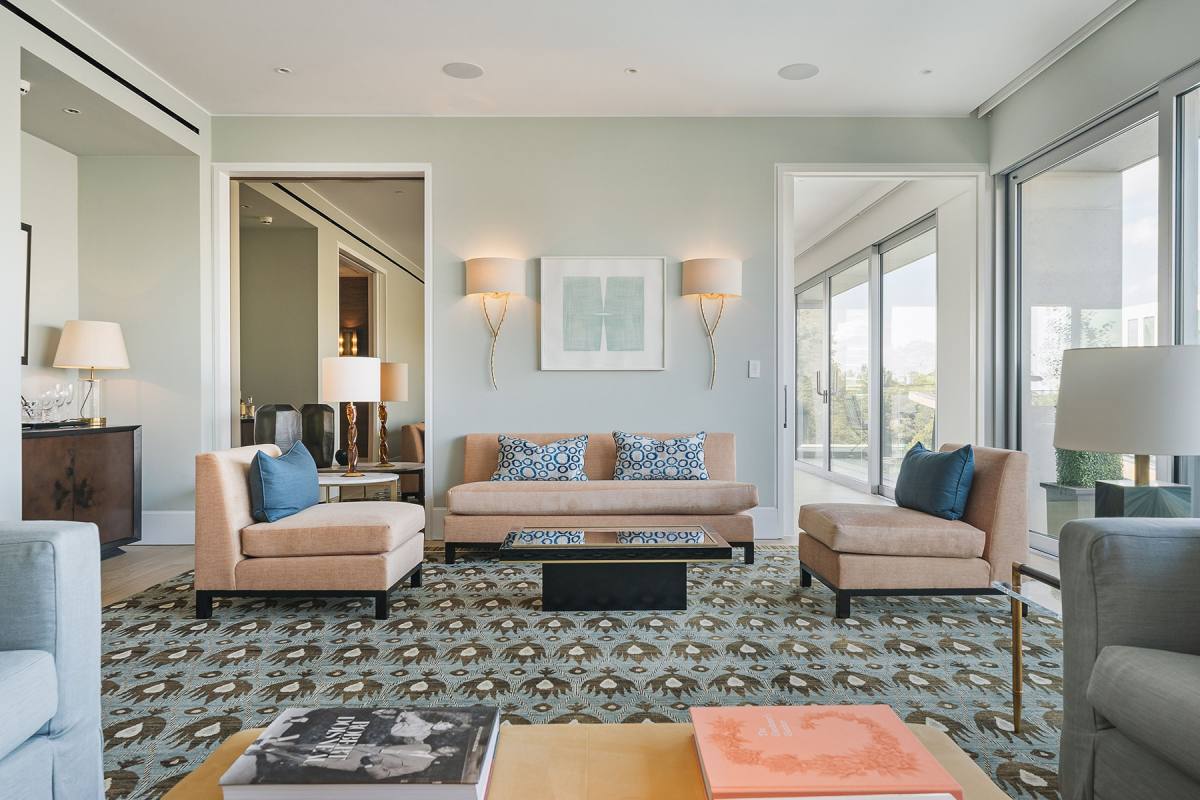 A four-bedroom flat in Holland Park available to rent for £10,000 a week

Davies says tenants last year had the luxury of being able to choose from around half a dozen properties. “Now they’re lucky if there’s one or two,” he says. “They need to make a decision if they want to get it. The situation has reversed very quickly — I’d say over the last four months.” According to Chestertons’ data, the stock of prime rental homes available in mid-October was 73 per cent down on the first month of lockdown in 2020.

Popular areas for super-prime rental properties are similar to those in the sales market: Belgravia, Kensington, Chelsea and Mayfair are high on the list for most tenants, though leafier St John’s Wood and Hampstead have risen in popularity over the pandemic.

One recently marketed by Chestertons was a five-bedroom terraced house in the Outer Circle of Regent’s Park in central London, with views over the park, a cocktail bar, gym, sauna and a separate mews house for staff or guests. The rent was £25,000 a week. Another, a four-bedroom property in Westminster at £14,000 a week, overlooks St James’s Park and has a private garden — an extra attraction in the wake of pandemic lockdowns.

If demand is soaring, what is preventing supply from responding to meet it? Estate agents point to a confluence of factors. Some owner-landlords were tempted by a surge in buying and selling activity over the past 18 months and decided to sell up, taking their stock out of the rental market. As London has opened up to travellers, the market for holiday rentals on platforms such as Airbnb is recovering, further reducing the supply of property for traditional short lets. And a seasonal spike has just passed, when wealthy overseas students snap up rental properties in London ahead of the start of term.

Tenants also won significant concessions from landlords last year as the market for short lets froze up in the pandemic. Some secured exceptionally good deals at relatively low rents and made the most of it by signing tenancies of three or four years — homes that will not return to the market for some time to come.

Estate agents cite another less obvious factor: flooding in London over the summer had little long-lasting impact on the mainstream market but fuelled demand for top-notch properties by displacing some owner-occupier families from their homes for months, as they called in builders to reinstate inundated basements. 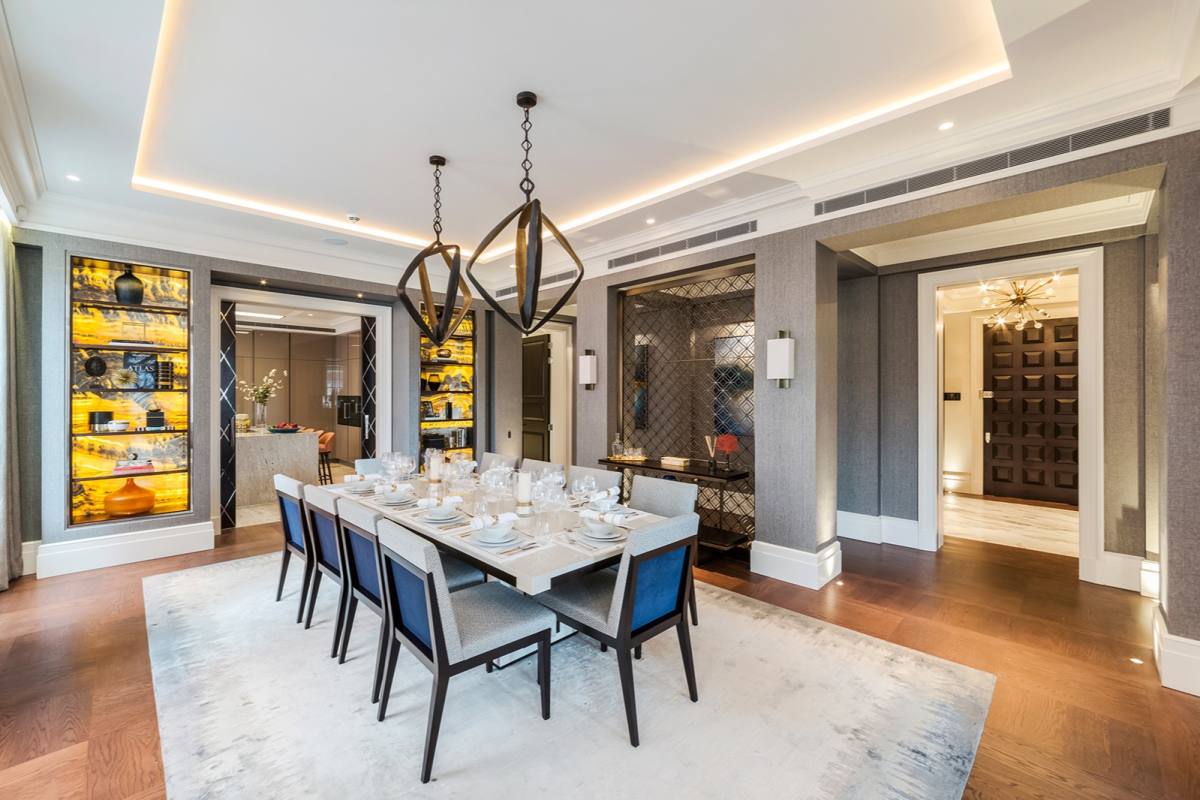 Space to entertain: a Mayfair flat, to rent at £13,000 a week, with three bedrooms and two reception rooms © Savills

Those in the mainstream market might legitimately ask why super-prime renters would not use their ample resources to purchase a home in London, securing a valuable asset and benefiting from any capital appreciation. Tom Smith, head of super-prime lettings at estate agent Knight Frank, says renting has become a much more popular lifestyle choice for wealthy clients who seek flexibility and freedom from red tape. The muted or even declining performance of London house prices in this segment in recent years has not persuaded them otherwise.

Stamp duty, too, is now a significant factor for the well-heeled when weighing renting against buying, with steady increases in the purchase charge for high-value properties. On a £10m property intended as an additional home, the £1.4m stamp duty bill alone could fund four years of super-prime renting in central London.

Those wrestling with these issues today are less likely to be corporate tenants, a market that agents say has lost share over the past decade or so to private wealth. “Eighty per cent of the time, it’s a contract with an individual, not a company,” says Smith.

Until the summer, agents say the main interest in rentals had come from the domestic market, though that does not imply UK citizens alone. Non-domiciled people, often with family members in the capital or existing ties to London, have been active in the super-prime market. But, from August, says Smith, discretionary international tenants returned as travel rules eased. “That’s happened quite quickly. Supply is really strained,” he adds.

The influx of wealthy renters varies by region. Europeans are returning to London faster than those from other regions, while Chinese tenants at the super-prime level are thinner on the ground. Turkish and Indian renters have also reappeared, often ahead of the start of the autumn term at British private schools.

One knock-on effect of this, says Smith, is a rejuvenated market for luxury apartments of a type that went rapidly out of fashion in the pandemic. Then, people sought outside space even in the densely developed areas of central London. “In the first half, rental demand was very house-heavy — 85 per cent at one point,” says Smith. “But now, between July and September, that’s swung back and it’s 45 per cent apartments.”

Landlords range from families who have left the UK for a spell overseas and want to draw an income from their property, to developers and investors who have failed to sell and prefer to let while waiting for an upturn in the market. “At that end of the market, it will often be a developer who hasn’t managed to get a price that’s acceptable to them or their investors,” says Camilla Dell, founder of buying agent Black Brick, who also acts for prospective tenants.

By contrast, many private owners are reluctant to let their properties because of the hassle, estate agents say. But securing mortgage financing for a super-prime rental property is seldom part of the problem for well-resourced owners. And, given that mortgage interest rates are at or near record lows, owners have an incentive to overcome the problems involved in becoming a landlord.

Nigel Bedford, associate director at mortgage broker largemortgageloans.com, says he recently set up a remortgage on a central London property worth about £20m for a Middle Eastern owner who had failed to sell at a price they wanted. Instead, they decided to let it. As is typical with ultra-wealthy owners, the mortgage came from a private bank, which charged 1.75 per cent above base rate for five years on the interest-only loan of £12m. “They can get money at sub 2 per cent, so it is not going to cost them to keep the property. The rental income will easily cover Ated [an annual tax charge] and running costs,” he says.

In a red-hot market, how does a prospective tenant improve their chances of securing the home they want at a price they like? Speed is key, says Izzy Birch Reynardson, head of super-prime lettings at Savills. “We’re seeing a lot of people who are not quick enough. I have two tenants seeking homes to rent who have lost three properties each.”

She describes a market in which, given the sums involved, the pool of landlords and potential tenants is small. This means a prospective tenant’s “profile” is a big factor in securing a deal. Wealthy families or those who work at the top echelons of financial services move in similar circles. “They all know each other,” says Birch Reynardson. “And if they don’t, they can always pick up the phone and very quickly find out what they need to know.”

That includes not only whether tenants are reliable payers but, for example, how they treat a property and how they interact with neighbours. Tenants with a record of bad behaviour will struggle. “It’s all very well if I get a massive price for my client but, if we get someone who’s throwing late-night parties, they’re known in the network,” says Birch Reynardson. “We know how people run their households.”

A poorly supplied market leaves much less room for negotiation. Many prospective tenants are finding themselves asked to submit sealed bids, fuelling price rises. But Dell of Black Brick suggests one eye-opening tactic that worked for two people she dealt with recently: “You can offer to pay the rent for a year up front. That makes you attractive as a tenant.” Such an approach is not so unusual at super-prime level, particularly for newly arrived expats without 12 months of payslips to show landlords, or young adults who could never afford the rent on their own but can rely on wealthy parents to write the cheque.

The imbalance of supply and demand has also given a big boost to off-market lettings, where agents do not advertise a property for rent but offer it to prospective tenants who have committed to a budget and are keen to move, says Smith of Knight Frank. “There are some very focused people out there and you can take it directly to them.”

In a sign of the times, he says he has even had tenant-clients recently who have signed pre-letting agreements on development properties where building work was not yet complete. “I had one client with a very healthy budget who had been looking for nine months. It was apparent that you could chuck a lot of money at the problem and it still wasn’t going to fix it. So, when he saw something that wasn’t finished, he was ready to commit.”