While the prime central London sales market may be slow, the rental market is taking up the slack, with strong tenant demand helping to lift rents in parts of the sector. Market fundamentals are encouraging some investors back into buy-to-let, after government reforms to taxation had discouraged such investment, with the aim of instead encouraging owner-occupation.

“Fresh imbalances between rental supply and demand are building, which will increasingly push up rental prices,” says consultancy Capital Economics in a recent report. “Assuming the disruption of a no-deal Brexit is avoided, we expect to see a surge in London rents across our forecast, with a cumulative 10% rise in the three years to 2021.”

Rents in prime central London have now risen in each of the past six quarters, according to property advisory firm JLL, following two and a half years of falls. While the average annual increase is just 1.2%, that masks high growth in parts of the market. For rents below £1,000 per week, rents rose by 3.2% in the 12 months to June.

“Available supply in the one-bedroom apartment sector is very low. Even when properties do come to market, they are let quickly, leaving little choice for prospective tenants and creating urgency in the market,” JLL says. It notes that professional workers are being priced out of the market by an expanding population of high-net-worth students, particularly in Marylebone, Fitzrovia and Chelsea.

At the other end of the market, there is also limited supply of four- and five-bed houses, especially good quality properties in prime locations. “There is particularly strong demand in the super prime lettings market above £10,000 per week,” JLL adds.

Knight Frank echoes this story about strong demand at the bottom of the market. The estate agency reports an increase of 22% in new prospective tenants in the year to July 2019, “led by increases in north London and in the city fringe for homes up to £1,000 per week.” With the number of new lettings listings growing by just 1% over the same period, “this growing imbalance between supply and demand will continue to exert upwards pressure on rental values.”

Combined with declining sales prices, these rent increases are pushing up the yields that buy-to-let investors can realise, although areas outside prime central London perform better.

“We’re retained by several clients looking to deploy significant sums into the London rental market, with almost 40% of our current client base seeking investment property rather than primary homes.” says Camilla Dell, Managing Partner at Black Brick. “Many of our clients, particularly those that are US dollar based, currently view London real estate as an opportunity, and whilst rental yields have historically been low, the rental market is looking more and more positive.”

Strong rental demand is also helping some buyers to accelerate their plans to buy, says Black Brick Partner Caspar Harvard-Walls. “Capital values and exchange rates are so good for buyers at the moment that it is making sense for some to buy earlier than they were going to and rent out the property for two or three years until they are ready to use it themselves.”

Meanwhile, a growing number of prime central London developers are offering rental guarantees to encourage sales, notes Dell. “Usually, these are offered on lower-value developments, but we’re seeing the practice extend into PCL,” she says, with guarantees as high as 6%, net of fees and charges. “These levels can represent a real opportunity, but buyers need to scrutinise these deals carefully and look at them in the context of the price of the property – buyers can, if they’re not careful, pay for the guaranteed yield in the price they are paying.”

Village people: Buyers on the hunt for neighborhoods

In the current market, developers have to work hard to differentiate their offering and create the sort of demand that allows them to charge premium prices. One way is by creating ‘neighbourhoods’, combining artisan shops and attractive public spaces with high-end residential development.

“Buyers are looking for more than just a great flat,” says Harvard-Walls. “They want to be part of a neighbourhood. The creation of neighbourhoods has driven prices way beyond those that are being achieved in comparable parts of London.”

The template for such an approach is Marylebone High Street, which has helped the area outperform other parts of London during the recent prime central London downturn. Its much vaunted village atmosphere helped drive a 4.6% rise in prices last year.

That approach has been adopted by the Grosvenor Estate, in a series of developments in Mayfair around Mount Street, North Audley Street and Grosvenor Square. The company talks about “improvements to the public realm”, “an improved pedestrian experience”, and “restoring individuality” to the area.

Another example is Cadogan’s Pavilion Road, just off Sloane Square, which complements the recent George House development on Sloane Street with what the estate describes as “a destination for independent, artisan traders”, including such traditional high street fixtures as a butcher, baker, cheesemonger and greengrocer, as well as a barbers, stationers, general store and fishmonger.

Typically, these initiatives are driven by large freeholders which are able to both develop property and direct the feel of neighbouring streets.

The counter example is Knightsbridge, where the lack of a single freeholder has made the realisation of these neighbourhood-wide development projects impossible. That is leading to buyers turning away from areas such as around Brompton Road, which is dominated by international chains and lacks the village atmosphere.

“Buyers want to feel like they are buying in London,” says Tom Kain, Property Consultant at Black Brick. “If the shops are all the same as they’d find in an international airport, that’s not necessarily what they want.”

A similar trend is underway in East London, especially around Spitalfields, notes Kain, although he adds that here the driver is less an individual large freeholder, but more organic gentrification.

An awareness of these initiatives can allow well-advised buyers to piggy-back on the pricing uplift they can bring to an area, says Harvard-Walls, noting that the Queensway development is adopting a similar approach. “A good buying agent should be able to provide the context of the area in which a client is buying,” he says. “Good local knowledge can ensure a buyer anticipates where these neighbourhoods are being created.” 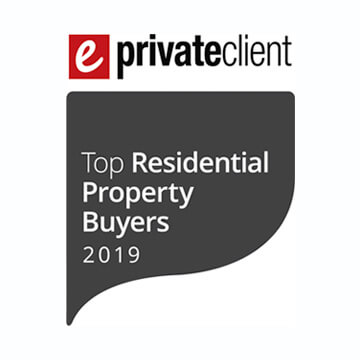 Black Brick has once again been named a Top Residential Property Buyer by ePrivateclient, the fifth time in a row the buying agency has been recognised by the publication.

The ranking is based on data collected on areas such as number of directors, number of buyers, the number of staff, fee structure, fee income and the company selling policy. Collectively, the tier 1 firms generated fee income of £29.37 million in 2018, an average of £2.67 million per firm.

“We are extremely pleased to be recognised once again by eprivateclient, making it five years in a row,” says Black Brick Managing Partner Camilla Dell. “It’s particularly encouraging to be placed in the top tier.”

Our clients had been looking for a year and had narrowed their search to a single street in Westminster but were struggling to find the right property – so they came to us for help. After losing out on a sealed-bid sale, we identified an off-market opportunity for a four-bed property in a Victorian mansion block facing Westminster Cathedral.

We were first through the door and quickly agreed a price at 5% below asking, and at what we believe is some 10% below comparable properties in the block. The challenge was that the three beneficiaries, one of whom was living in the property, were in dispute over the sale. An extremely sensitive and time-consuming conveyancing process resulted, requiring careful negotiation, over six months, before contracts were successfully exchanged.

Black Brick is delighted to offer for sale this two-bedroom, two-bath apartment with views over the stunning communal gardens of Lowndes Square in Knightsbridge, close to Hyde Park and the shops and restaurants of Sloane Street.

The portered property, which measures 1,347 square feet, comes with access to the communal gardens, a lease of 994 years and a share of the freehold.