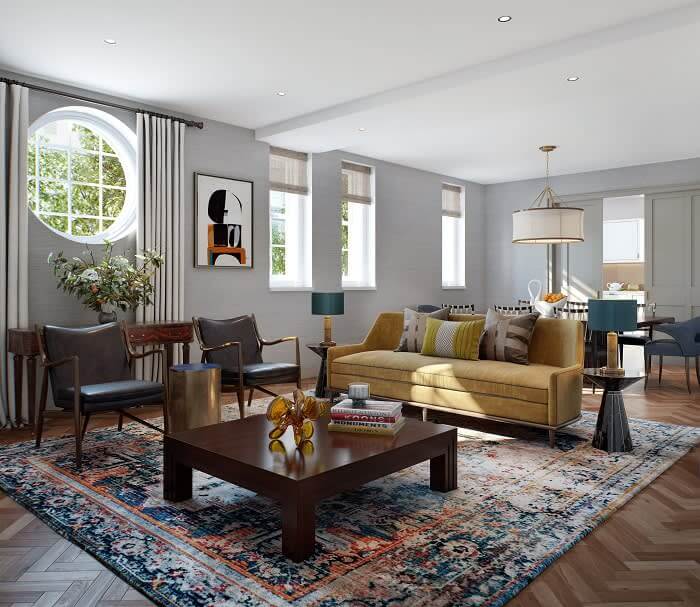 ”The company he founded in 1999, Visualisation One, crafts computer-generated interior and exterior images of high-end properties, many of which do not yet exist. Using digital 3D models, Flynn’s team helps property developers show potential buyers what they are bidding for.

With the right mix of artistic and technological flair, a CGI can be so lifelike it is difficult — if not impossible — to tell it is a rendition of something that does not yet exist.

Visualisation One’s images are eerily realistic, with details handcrafted by creative specialists. High-quality work does not depend on fancy software, Flynn says, but on the 24 artists who work at the company, based in Chester. “It is not a mechanical process, but an artistic process,” he says.

Property developers will hand over architectural specifications, even down to the detail of door handles. The visualisation artists then mould 3D models of the building and everything that will be shown within it, from early-stage digital “clay models” that outline the proportions of a room to the leather stitching on a sofa. 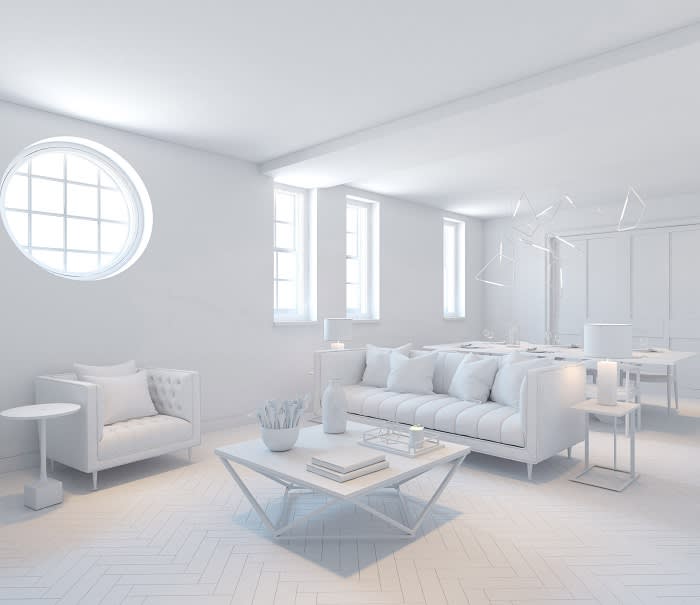 STEP ONE – An image of a room at Alchemi Group’s Westminster Fire Station development in London (top) was created by Visualisation One. The so-called “white card” image is the 3D model of the room based on the floorplan and the angles that the artist feels best represent the room’s potential. 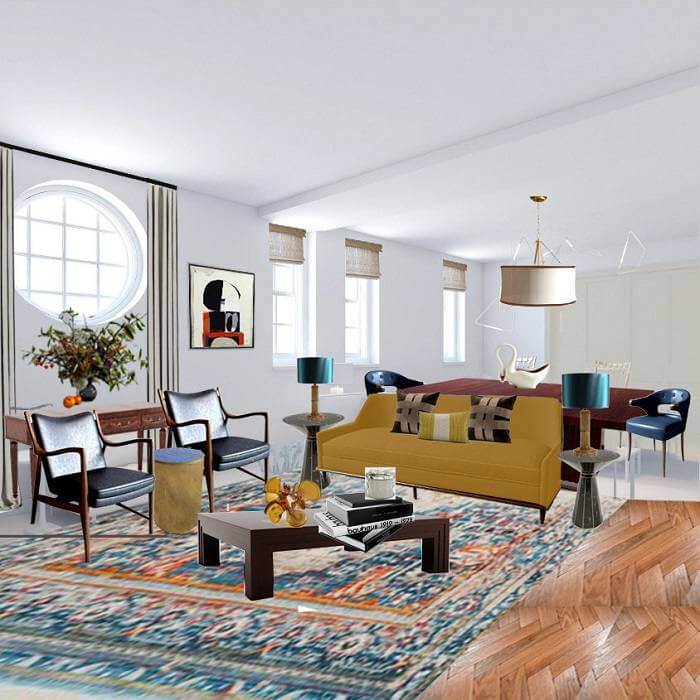 STEP TWO – The first round rough draft for styling so the furniture visualisers can get an idea of actual scale, proportion and style of items that will feature 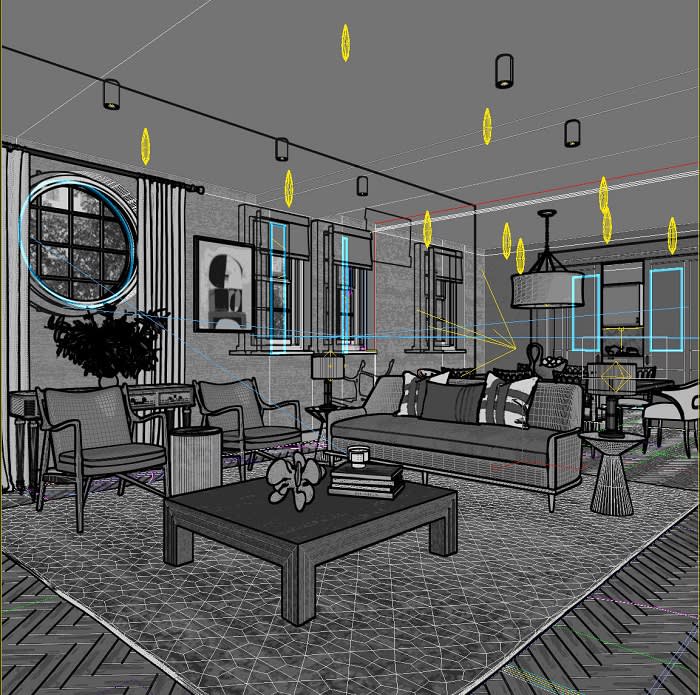 STEP THREE – The wireframe – a three-dimensional model that only includes vertices and lines to illustrate the working model before creating the final image, which can be shown to potential buyers.

One image will usually take the company between five and eight days to complete, as accuracy is key. “If you show someone a lovely image of a kitchen, and two years down the line they walk in and the kitchen is different from what they bought [ . . .] then we believe the developer will lose all credibility,” he says.

But a disappointed buyer would be unlikely to make a legal claim citing a misleading CGI, says Laurie Horwood, partner at Farrer & Co. “A developer would make clear you cannot rely on marketing material, and that CGI are indicative only,” he says.

“There are certainly studios that do not mind bending the truth, but the developers that we work with would not tell us to edit out large buildings [that might block views],” Flynn says.

But developers and visualisation studios can run into trouble with CGI. At the end of last year, property developer Fairview New Homes removed a mosque from promotional material of new-build homes in Hornsey, north London. Fairview New Homes declined to comment for this article.

Anna Parry, partner and projects director at London-based CGI studio Hayes Davidson, says the accuracy of computer-generated marketing material comes down to the integrity of the property developer and studio. Aside from tidying up rubbish from streets, her studio will sometimes remove cranes or “complete” a neighbouring property that is being built in order to show the view that will be there. Parry says her team has never been asked to do edits it has not felt comfortable with.

What is more likely is that developers choose to showcase the most exceptional rooms and views in a development in their marketing material, says Alex Oliver, buying consultant at the buying agency Black Brick. “This can be slightly misleading,” he says. “There is no substitute to visiting the site, to get the ambience of the area and ensure you get a unit with a good view.”

An example of how prospective buyers might benefit from visiting a site is London’s Neo Bankside. Some of its residents have said they were not aware the neighbouring Tate would provide a platform for museum visitors to peer into their homes. Native Land, which developed the property, says its CGI marketing material had included imagery that showed the Tate’s viewing gallery, adding residents had not complained about it being misleading.

Flynn believes interactive content will grow in popularity. His studio is already dealing with requests for material, such as digital images, that enables potential buyers to see how a room would look like with different colour schemes, or virtual reality experiences.

Giles Stevens, acquisitions director at luxury developer Elysian Residences, says CGI marketing is particularly important to the company as it targets older buyers, many of whom have never bought property off-plan before. “Communication from us to them needs to build trust and take them over the threshold of one of the biggest decisions they will take in a long time,” he says. “It is a bit of a cliché, but a picture says a thousand words.

”According to Stevens, some studios create work that is “more affordable and less convincing”, adding Elysian Residences will spend between £3,000-£5,000 on each CGI image. “Creating an inspiring and beautiful image of what we are building is crucial,” he says. “If you cannot sell the units at the end of the day, then the whole purpose of property development does not make sense.”

“We are in a challenging market at the moment,” Stevens says, explaining how high-quality marketing material is expected to help developers sell as buyer demand stalls. The company also commissions film walk-throughs or scale models of properties.

In the end, says Flynn, digital artists are helping to sell a dream. His team will even dictate the weather in the worlds they create. Judging by property listings, one could believe the sun always shines.

“We do have rainy days in this world as well. Some clients — particularly architects — like muted imagery,” says Flynn. One of his creative directors, Patrick Corcoran, adds: “Although it does seem to look like the Mediterranean most of the time.”